Too few workers a real headache for Labour 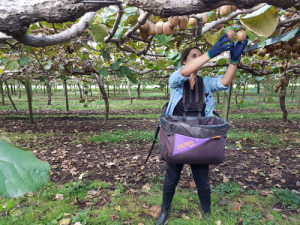 There is a shortage of 500 workers in the kiwifruit sector.

With a shortage of 500 workers in the kiwifruit industry, the declaration of a seasonal labour shortage in Bay of Plenty could be imminent.

It is “highly likely” that declaration will be made, the Kiwifruit Growers Association chief executive Nikki Johnson told Rural News last week. But they have to wait until the peak of the season’s harvest – in about a week – before they can make the declaration.

This follows hot on the heels of a seasonal labour shortage declared in the Tasman district recently in several crop sectors and a similar declaration in Hawkes Bay early in March in the pipfruit industry.

“We have labour shortages in the industry right now but in order to declare a labour shortage with the Ministry for Social Development (MSD) there is a process we need to go through,” Johnson says.

They can’t start that process with MSD until they are at the peak of the season. But seeking that declaration “is highly likely, to be honest”, she says.

Johnson says as in Hawkes Bay, the first couple of weeks of the season have not seen the usual number of backpackers arriving.

“We don’t have the internationals students we would have had over the last couple of years,” she says. Last year was a low season for us but the volumes we are harvesting this year are very similar to the volumes we harvested in 2016. We didn’t have a worker shortage in 2016. But it is probably a combination of the lower numbers of backpackers and international students which is causing the problem.

“It is possible the backpackers will all arrive in the next two weeks... they could be in Hawkes Bay with apples, they could be travelling, we are not really sure.

“Because we can’t track them we won’t know until the situation occurs. Whether we will suddenly have an influx of people, I am not sure.”

She says the industry now has about 500 vacancies. The biggest shortage is in Bay of Plenty which grows 85% of NZ’s kiwifruit.

“The other regions appear to be relatively okay although Nelson declared a labour shortage last week.”

These labour shortages may pose a problem for the coalition government, as both Labour and its support partner NZ First campaigned heavily against reducing immigration and migrant labour.