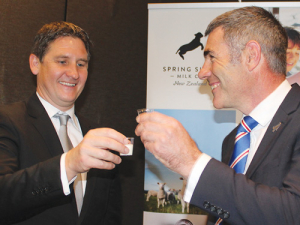 Guy says the Sheep Horizons Three PGP programme will take the industry from revenues of about $10 million a year to $200m-$700m by 2030.

However, one MPI estimate puts that figure at $100m. The industry would only grow to about $33m by 2030 without the PGP programme aiming to deliver a market driven end-to-end value chain, according to this estimate.

Spring Sheep Milk Co chief executive Scottie Chapman believes there is significant and growing demand for sheep milk, especially from Asia, where consumers like its nutritional value, flavour and digestibility.

"To achieve a sheep milk industry delivering domestic and export returns in the upper range of $700m, NZ will need up to 55 farms managed by farmers with specific sheep milking expertise," he says.

"The current farming model in NZ won't achieve this, which is why this joint investment by ourselves and MPI is so critical."

MPI and Spring Sheep Milk Co are now negotiating a contract so the programme can formally begin.

MPI director-general Martyn Dunne says MPI wants to ensure the programme has wider benefits. It will look at genetics and other issues that enable the programme to be truly of national benefit. It has a programme for marketing and development, research and genetics.

"It also includes developing farming and environmental systems, which are topical these days, as is the social licence to be able to carry it out. They will be building the right capability and skills required for successful dairy sheep farming in NZ," Dunne added.

"I am certain we will develop a stream of people with specific skills in NZ in the sheep milk industry that will grow and benefit in the wider sense not only primary industries but dairy in its broader sense."

It also includes developing the land farming component, in which Landcorp will play a large role.

Chapman told the launch of the project in Auckland recently that they have a unique opportunity to strengthen NZ farming by getting it right in the market first. They will match the product to consumer demands and work backwards.

Sheep milk is worth at least $10 billion per annum globally and is growing at 10% globally.

Guy says NZ now produces about 160L/ewe/year and there is opportunity to grow by at least an extra 100L/ewe/year. However, the current NZ cost structure is higher than in other countries.

"There's opportunity to drive those costs down and increase the sale price by about $1/L."

"The flock size and genetic pool in NZ is not great. If we are going to turbo-charge that we need to get the right size, get some AI, get some embryos in and grow the size of our nucleus."

Guy says the NZ industry needs to look at a prototype for housing, the best pasture species, work the animal husbandry model, develop onfarm trialling and produce a technical manual.

There will be open field days for NZ farmers to get involved and engaged.

The market insights will put the consumer at the centre plus developing high value products.