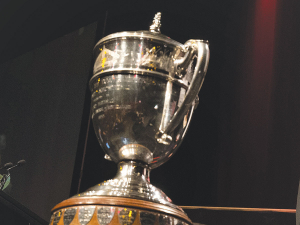 The Ahuwhenua Trophy is the most prestigious award for excellence in Māori farming, this year the competition is for sheep and beef.

The Ahuwhenua Trophy is the most prestigious award for excellence in Māori farming and was inaugurated 89 years ago by Sir Āpirana Ngata and the Governor General at the time, Lord Bledisloe. The objective was, and still is to encourage Māori farmers to improve their land and their overall farming performance with an emphasis on sustainability.

On a three-year rotational basis, the trophy is competed for in the sheep and beef, horticulture and dairy sectors. This year the competition is for sheep and beef. The announcement and judging of the finalists is normally held earlier in the year, but this year the competition was put on hold for several months due to the arrival in NZ of the Omicron variant of Covid-19.

Nukuhia Hadfield, chair of the Ahuwhenua Trophy Management Committee which runs the competition, says it's exciting to see the emergence of such high calibre finalists - given the challenges that Māori farmers are facing. She says the uncertainty created by the Covid-19 pandemic has added to the difficulties farmers have endured with severe adverse weather events, labour shortages in the sector and a whole raft of new regulations.

"This year's finalists, along with the other entrants in this competition show the strength and determination of Māori farmers to successfully overcome adversity and get on with the daily task of farming in a truly sustainable way," Hadfield says.

Field days will be held at the farms during August and September. These are open to the public and provide an opportunity for the finalists to showcase their properties. The winner will be announced at the awards dinner in Hawke's Bay in late October.

The Onuku dry stock property near lake Rerewhakaaitu, just south of Rotorua, is one of several farms owned by the Trust. These include four dairy farms, three bovine and one ovine, a dry stock farm, forestry, natural reserves and a mānuka plantation for the production of honey.

The farms cover a total area of 2,362 hectares of which 740 hectares is retired. The area being farmed covers 1,542 hectares.

A total of 14,800 lambs are finished on the farm, they trade cattle and carry about 600 yearlings. The farm also provides silage and hay to the dairy farms.

A feature of Onuku's farming operations is its strong environmental focus. It is part of Project Rerewhakaaitu, a voluntary local farming initiative to help project local waterways and lakes.

Another strategy is for Onuku owners to be employed on farm and the Trust endeavours to implement this whenever possible.

The Trust has develeoped comprehensive Land Environment Plans to guide how to best utilise the land - including the retirement of erosion prone land, fencing all waterways (approximately 35 kilometres), riparian planting and improving water quality.

Wi Pere produces approximately 1,100,000kg of meat and fiber annually and optimises product returns by selling via a Māori Collective Cluster, Awhina to the Alliance Group.

Hereheretau Station, near Wairoa, runs a 2,000ha sheep and beef farm and is the major asset of the Māori Soldiers Trust.

Today earnings from Hereheretau Station are transferred into the Māori Soldiers Trust Scholarship Account for distribution as part of the Sir Āpirana Ngata Memorial Scholarship programme. These scholarships are granted to Māori for higher education.