They had just one chance 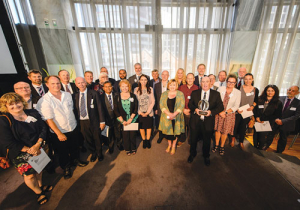 The leader of the team that cracked the kiwifruit’s PSA problem says a hunch on how to deal with the outbreak paid off.

Dr Bruce Campbell says they had just one chance to get it right and they did.

He attributes a lot of their success to the long term investment in science by all people in the kiwifruit industry.

Campbell says Plant and Food’s partnership with Zespri, growers and the wider industry meant that as scientists they were better prepared to make a scientific contribution when the disease struck.

“There were still many challenges that turned up,” he told Rural News.

“The first was knowing how the disease really operated in NZ, because it was new to the country and our kiwifruit industry.

“Working out a diagnostic test, trialling all sorts of possibilities from different crops from different parts of the world and testing different genotypes and genetic types that might be able to be better adapted to tolerate PSA were all part of the process,” Campbell explained.

“There were a whole number of elements that had to come together to produce a solution.”

Plant and Food had a team of 35 in fact about 100 were involved all told, “including people from New Zealand universities and overseas institutions, who all contributed to finding what eventually turned out to be the right answer.”

Campbell says a key challenge was on the genetic side – finding a variety of kiwifruit that was resistant to PSA, unlike Hort16A which was hit by the disease.

“So we really only had one shot at it and there was a lot of pressure on the team to get it right. If we got that wrong and came up with something that wasn’t able to withstand PSA there would have been problems because everyone had sunk their investment into what we were doing.

“As it turned out, Zespri had done some early commercialisation of the Gold 3 variety, which proved to be able to withstand PSA and be robust enough to become the replacement fruit for Hort 16A,” he says.

The Plant and Food team had to get answers quickly, doing their work in a very narrow time-frame and this meant adapting their science systems to work within these limits.

“We also had to cope with more uncertainty than scientists would normally be comfortable operating with in order to drive forward to a solution as fast as possible.”

He says not only did Plant and Food liaise with growers, they also had to show the banks that there was a genuine opportunity that their scientific work would result in a new and PSA-resistant strain of kiwifruit being produced.

“The finance sector backed the industry and as a result we solved the PSA issue and today we have a sector that by 2025 will earn $4.5 billion dollars a year”.

Bruce Campbell says because of the achievements of Plant and Food and the kiwifruit industry, NZ has become the ‘go-to’ place for advice on PSA.

He says NZ has positioned itself strongly internationally, as borne out by requests from other countries for NZ to run symposia to tell its success story.

“Diseases can be so damaging to economies and countries and the opportunities to link up with the international science community to share precompetitive information is really important,” Campbell says.

“In this case, the prize money will be put towards developing these international networks [for] collaborative approaches so that we are better prepared for any further disease incursions.”

This will ensure that everyone is going to be better off by being able to maintain food supply in the future.

Campbell says the Plant and Food scientists are humbled and pleased with their solution and the resulting recognition.

“This is a triumph for science and it’s important to promote scientists who have shown they are there to be able to deliver to the needs of industry and the community.”