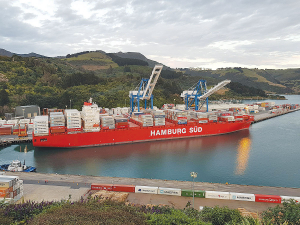 A recent report from MFAT says last month there were 100 ships queued up over 1,000 miles waiting for a berth at the ports of Los Angeles and Long Beach.

There seems to be little respite on the horizon for NZ exporters and importers with massive delays in some key overseas ports.

A recent report put out Ministry of Foreign Affairs and Trade (MFAT) says last month there were 100 ships queued up over 1,000 miles waiting for a berth at the ports of Los Angeles and Long Beach on the west coast of the USA. The report singles out the other hot spot for delays as 'Asia' and says the two problem areas are compounding the issue for each other.

The shipping clog-ups are said to be the result of consumer demand due to the pandemic. There are conflicting views on how the sea freight delays will play out in 2022 and there is a suggestion from some sources that things might improve. However, others disagree and say it will get worse.

Whatever good news might be in the offering the fact remains - according to the report - that average freight rates have risen by 50% in the past year. The report put some numbers to a scenario that continues to frustrate NZ exporters and to which there appears to be no end in sight.

It also has some interesting statistics on air freight, stating that global demand is up 9% since 2019, while capacity for freight has declined by almost 9%. The word is this trend will continue mainly because of the problems with sea freight, which has seen exporters take to air freight, despite the increased cost. In NZ, for example, cherry exports are now air-freighted.

The other reason given for choosing air freight is that companies are seeking to get product to market because of the labour shortage in NZ, which is delaying production.

A telling statistic revealed in the report is that world passenger traffic fell by 53.4% in September 2021, compared to the same period in 2019. At the same time, demand for air freight grew by 9%.

How the pandemic has shaped future fruit production

Global fruit production has not only perservered in the face of a worldwide health crisis, it has also continued to adapt in response to the evolving landscape.

Fonterra tanker to moon and back

For Darfield tanker operator Rowly Stewart it's hard not to get attached to a tanker you've driven for six years – especially when you've travelled the equivalent of getting to the moon and back - twice.