Spy in the sky promises no stock upset 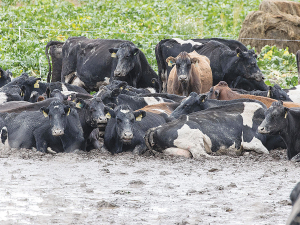 Images like this of cattle in mud has sparked the winter grazing campaign.

Farmers are being assured that any spying on grazing practices on farm this winter won’t upset stock.

Waikato businessman Angus Robson, the activist spearheading a campaign against dodgy winter grazing and its effect on animal welfare, says they will not breach Civil Aviation Authority (CAA) rules on flight.

“We will not do any activity which may upset stock. That would go completely against the intent of trying to improve animal welfare,” he says.

Federated Farmers says Southland farmers have reported seeing aircraft flying low over their stock recently. Farmers are bracing for an aerial campaign by activists this winter.

CAA says the minimum flying height anywhere is 152m (500ft) except for low flight training areas, aerial spreading and emergencies. But Robson says his group has no intention of flying low over stock.

“If farmers see an aircraft flying below the CAA legal minimum of 500 feet it will not be us, and they should report [it] to CAA,” he told Rural News.

“This height limit was set by CAA as sufficient to avoid upsetting stock and avoid ground obstacles.”

DairyNZ warned farmers at the recent South Island Dairy Event conference in Invercargill that they should brace for an aerial campaign perhaps using drones.

Robson isn’t ruling out using drones but says they “don’t think there is a need for drone footage and are not soliciting it”.

“But if a member of the public gives us [drone footage] we may use it. We would not use any footage which indicated stock distressed by how the images were taken, for example scared by a drone.”

Robson has also allayed Federated Farmers’ concerns that footage could be “doctored”.

“We will certainly not ‘doctor’ any footage. There is no need to risk our credibility. The pictures will speak for themselves as is and we will only use this year’s footage.

“I have agreed with Federated Farmers that we will also run footage of best-practice winter cropping, because it’s important to understand that the campaign is about getting the laggards into line, not harming people over minimal environmental and animal welfare effects.”

Environment Southland has confirmed that monitoring flights were planned for this month – three flights followed with farm visits.

Environment Southland says it hopes to see a good uptake of good management practices in intensive winter grazing by farmers this year.

Rules require farmers to keep stock away from waterways during winter, and a range of good management practices are available for grazing paddocks to mitigate harm to water quality.

Environment Southland compliance manager Simon Mapp said flights would be monitored during the next few weeks.

“We are hoping to cover as much of Southland as we can in three flights, and staff will follow up with ground inspections if any issues are seen from the air,” he says.

The New Zealand Veterinary Association says there is no place in modern farming for winter grazing that compromises animal health and welfare.