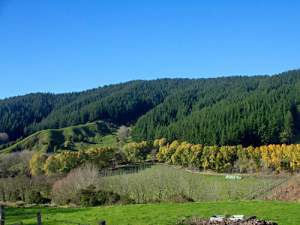 Agriculture does not currently come under the ETS, but it will be considered.

Will sheep and beef farmers in future grow trees to sell offsets to dairy under the Emissions Trading Scheme (ETS)?

That could work in the event that agriculture is brought under the ETS, says Peter Weir, chair of the Farm Forestry Association’s environment committee.

Beef + Lamb NZ has reported that emissions from sheep and beef are down 17% on 1990 levels, he says.

“In theory, sheep and beef is in credit – they are certainly not on the hook for emissions; that is the dairy [effect],” Weir told Rural News.

He says that will be a relief to struggling sheep and beef farmers. But dairy emissions are “through the roof” and continuing with Fonterra’s growth agenda of 4% a year.

“The growth in emissions has come from dairy but it is unrealistic to expect dairy farmers to plant highly productive Waikato or irrigated Canterbury dairy land.

“Sheep and beef hill country cockies have the land to do the planting. But their emissions haven’t grown. So how do you make the sheep and beef cockies [plant trees]?

“There is a bit of a conundrum there: the growth in emissions is from dairy and not from sheep and beef, but the sheep and beef farmers are in a position to [let land] revert.”

He suggests sheep and beef farmers could plant trees to sell offsets to dairy under the ETS.

Planting trees, especially on rolling hill country, is also better than cost-neutral for a farmer, he says. Returns on harvesting logs are, over the long term, higher than hill country farming of sheep and cattle.

However large areas of North Island hill country are not suitable because of erosion risk.

Agriculture does not currently come under the ETS but Climate Change Minister Paula Bennett told Rural News recently it will be considered as a mechanism to encourage the industry to cut emissions after the recent signing of the Paris agreement on climate change.

Weir was commenting on the parliamentary commissioner for the environment’s (PCE) report on greenhouse gas emissions from agriculture.

The PCE did not address the ETS. However the commissioner did call for the planting of more trees. Immediate opportunities for reducing New Zealand’s emissions lie in new native and plantation forests, the commissioner says and she wants to see real progress in this area.

“It might not be the whole solution, but one million hectares of trees would make a big difference, not to mention the added benefits for erosion and water quality,” the report says.

Leveraging off the PCE report, Weir says farmers may have large areas they can allow to regenerate in natives or they could plant a longer-rotation crop like Douglas fir or redwood if the climate is suitable.

Otherwise they could grow 27-year rotation pinus radiata if they want to maximise cashflow.

“Logs are selling well, it is a good product.

“But if you are taking a longer view and don’t want to get involved in the harvesting then grow something for 100 years. That points to redwoods or Douglas fir.”

Weir says farmers should get advice from forestry consultants on what to plant. The PCE report shows you can get away with planting about 5ha of radiata or let 50ha of natives revert, he says.

“It is prohibitively expensive to plant natives. You would have to have a seed source. If you’ve got manuka and it’s spreading then you are probably away but if you are in the middle of Canterbury and there is no native source, there is nothing to revert.”

Weir believes agriculture will have to come under the ETS and farmers will either have to pay for emissions or grown the offsets themselves.