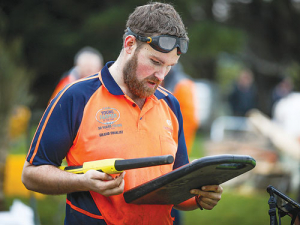 Logan Wallace in action during the practical session.

“It becomes all-consuming and to put yourself through it a second time is incredibly tough,” Wallace told Rural News. “It’s addictive as well, though. That’s the issue.”

Wallace (28) reached the grand final in 2016 then stood back for a year before taking the plunge again.

In the interim, he says, he learned a lot about keeping calm and pacing himself, and developing his planning and leadership skills especially through involvement in the local search and rescue organisation.

His win, in the competition’s 50th anniversary year, means the title is staying in the south for the second year running, following last year’s win by Milton’s Nigel Woodhead.

Wallace, who holds a Certificate in Agriculture and a Diploma in Rural Business from Telford, runs 2300 ewes on a 290ha farm at Waipahi, about 20km east of Gore. The intensive sheep breeding and finishing property also carries 700 hoggets and 400 trading sheep.

The farm has been in the family 30 years. Wallace started running it five years ago under a trading partnership with his parents Ross and Alexa. He now leases the land from his parents, having bought their shares in the trading company a year ago.

Wallace runs the farm as a one-man operation. He has introduced Texel genetics, running Romney-Texel crosses with the twin goals of low-fuss ewes with strong mothering instincts, and lambs which quickly reach their weight targets.

Wallace is heavily involved in his local community, as a leader of Gore’s Calvin Community Church youth group, and membership of the Pomahaka Water Care group, SAR and Toastmasters. He joined Toastmasters because of Young Farmers, after “mincing” a speech in his first regional competition and knowing he needed to do something about it.

Wallace’s winning formula this year was to concentrate on his known weaknesses, particularly because of the short time he had to prepare.

All this while also running the farm?

“Yeah, Dad did a fair hunk of that in the last couple of months,” says Wallace.

“A lot of faith and a lot of prayer went into it too. A whole heap of support from the Calvin church.”

“It’s an amazing feeling, It’s incredibly tough but what you learn and the skills you build on, even through the district and regional levels – those skills you learn are great and the opportunities just from being involved are really cool.”

His prizes include a New Holland tractor, a Honda quad, cash, scholarships, equipment and clothing.