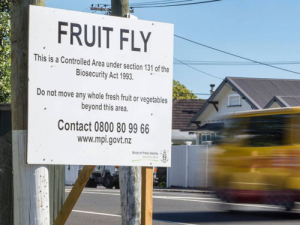 A field crew continues work in the suburb of Devonport today.

A second Queensland fruit fly has been discovered on Auckland’s North Shore.

The solitary male fly was collected from a fruit fly trap and formally identified yesterday. It’s the second Queensland fruit fly found in the past week. The first was detected in a surveillance trap in Devonport on 14 February.

The Ministry for Primary Industries (MPI) director general Ray Smith says while there have now been two finds, it does not mean New Zealand has an outbreak of fruit fly.

“We are totally focused on finding out if there is an incursion of the Queensland fruit fly in these areas. At the moment, these are two single males found quite some distance apart, and there’s no evidence of a breeding population.

“We have an absolute commitment to tracking down these unwanted pests and ensuring New Zealand is free of harmful fruit fly.

“As such, I have commissioned an independent assurance review of our air and cruise passenger pathways which will get underway next week. We want to ensure we have the best system possible.

Australian expert Rob Delane has been appointed to carry out that review, and he’ll be on board next week to get that underway.”

“Biosecurity New Zealand deals with dynamic challenges. Changing trade and traveller patterns, climate change and emerging technologies mean we have to continually evolve our biosecurity system. Advice from the independent assurance review will be invaluable.”

On the ground in Auckland, a field crew continues work in the suburb of Devonport today, where no further fruit flies have been found. A similar field crew has begun work in Northcote.

To manage the fruit fly that has been found, an area of Northcote has been placed under a Controlled Area Notice (CAN). This is effective from today.

This restricts the movement of certain fruits and vegetables out of the Controlled Area to help prevent the spread of any fruit flies if there are more than one. The CAN is a legal notice and might affect you if you live in the area.

A brochure with information about the fruit fly and controls will go to homes in the area this morning.

"We will be working closely with the local community as we have found from past experience that public support is vital to success.”

The Queensland fruit fly has been detected before in the upper North Island. Of these detections, only one in Auckland in 2015, turned out to be a part of a wider breeding population and this was successfully eradicated.

Biosecurity New Zealand is also continuing a large field operation in the Auckland suburb of Otara following the discovery of a single male Facialis fruit fly in a surveillance trap in the area. This is not related to the current Devonport or Northcote situation.

The fruit fly response at a glance:

- More than 80 Biosecurity New Zealand staff working across all responses.

- Field crews are working across these responses, working closely with the communities impacted.

- Biosecurity New Zealand is busy having leaflets translated into a number of languages including Samoan, Tongan, Chinese, Cook Island Maori, Fijian and Hindi.

- Signs have been put on key arterial roads in and out of Otara and in Devonport, and will now be placed in Northcote.

- Bins will be provided in the area so local people can safely dispose of fruit and vegetable waste.