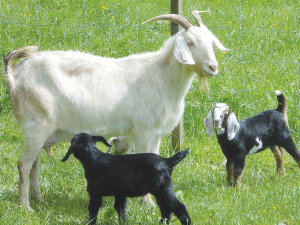 A 2017 commissioned Massey University report on the NZ Goat Industry will disappoint many.

The report charts the future for domestic and export goat products and it will disappoint many farmers, industry insiders and academics, says long-time industry expert Garrick Batten.

In the first of two articles, he outlines why the research produced egregious results, and claims it has been further compounded and confused by three NZ Society of Animal Production (NZSAP) papers repeating misinformation.

Massey stands behind this research, but others claim it fails on grounds of academic integrity and in practical farming advice.

The report presents a picture of information from different sources with little consideration of interrelationships and produces conflicting statements on the same subject.

For instance, it claims that goats are not compatible with sheep slaughter machines. This is despite the fact that some plants are already using them.

There is constant confusion from text peculiarities – such as ‘goats’ being adult dairy goats, but all-ages fibre and meat goats. Maximums are used as industry averages for prices, kidding percent, carcase and fibre weights. The report also includes irrelevant information, eight typos, casual correlation between text, tables, references and comments -- all showing poor editing and adding to general confusion.

Examples of confusion from misused facts were current meat production using different schedule values of $2.50 per kg for feral goats, when it was $3.50-$4.00 as for other breeds. An exports table of 90% feral meat stated $6.93 for all, except minor Boer $30.

Another example is artificial adjustment of both numbers and carcase weights to fit a magnified 25kg Boer slaughter weight. Cull Angoras are more likely to weigh 16-18kg not 25kg. Dairy goats are 25kg not 40kg, and feral goats 11-12kg from historical averages – not 9 - 20kg used elsewhere. That was part of a deliberate attempt to justify a Boer carcase worth $750 FOB, using unsubstantiated average FOB value of $30 per kg. These inaccurate carcase weights, sloppy conversions and analysis by reverse engineering a computer model destroyed any credibility of this section of the report.

Meanwhile, some aged references describe current situations such as 1997 management, 2006 and 2011 for practices, 2010 for interest level and 2011 for health status. An unidentified majority of farmers contributed opinions, although few were interviewed.

Some references in the research are selectively interpreted to suit perceived conclusions – such as ignoring a weaning liveweight of 17.4kg and substituting an eight-month weight of 30kg when the reference adult figure was 38kg. Other parts of the study have no relevance, eg using US retail prices, including meat products not from NZ, and not confirmed by USDA data.

One NZSAP paper used unrelated Australian export kg value of $8 for all breeds in a heroic effort to change the meat section. But an average eight-month commercially raised Boer carcase valued at $8 is still not worth $144. This discredits the report itself.

Some text and tables are just confusing, eg average daily milk production of 2.7-3.5 and 3.8 litres. A key text example states that almost all the dairy goat herd produced non-cheese dairy products, yet both the report and NZSAP papers assumed that 20% -- now and in the future – would be cheeses sold at inflated prices. One statement had over 9000 Angora goats producing 3kg mohair, another 4kg, for export of 15 tonnes— plus 15% local use.

The report’s summary ignored imperfect information sources later noted in the NZSAP papers, but recognised unavailable production costs and processing and marketing information. Yet without reasonable data, the report concluded meat has the greatest potential based on premium cuts from a Boer herd built from zero to 7175 in 25 years on 23 farms.

However, it ignored its own national output table showing local consumption of other goat meat sources increased from 22 to 34% in three years.

One NZSAP paper favoured milk products potential based on growth from zero to $185m in 30 years, but did not examine that future. The historical mohair clip decline was not compared with the speculative forecast of increased value.

In summary, the report uses models that cannot be believed. These can either determine inputs for a required output or produce an output from assembled inputs. Either way, inputs need to be currently factual, practical and relevant. In this report they are not.

There have been two years of attempts to get the report withdrawn to save academic embarrassment and the industry’s future from damage.

Initial approaches to authors were ignored until higher intervention, a year later, made one amendment.

Another approach got the three derived NZSAP papers reviewed. A final approach to the Massey University provost, under its Code of Responsible Research Conduct standards, eventually got ignored.

• A second article will interpret the report with more information for farmers.

Garrick Batten has a long professional and practical career in the goat sector. He has farmed goats for 30 years and developed the internationally known Kiko and more recently Kikonui pastoral goat breeds. He has delivered papers at local and international conferences on various goat topics and written several goat books. His latest book is: ‘Big Buck$ for Pastoral Farmers’. It is especially for livestock farmers new to commercial goat farming. Available from: https://www.copypress.co.nz/real-nz-books

The dairy landscape in New Zealand is changing, as it is around the world.

Why are goat profits not matching prices?

Processing issues with goats, but problems not insurmountable

Why have processor/exporters not encouraged more goat meat when it sells at comparable retail prices to lamb in USA?