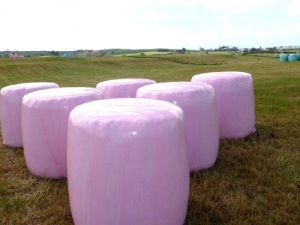 Agpac will continue its efforts to raise awareness of breast cancer in rural communities.

The crop packaging company will again be selling its pink silage film and netwrap during the 2015-2016 harvest season.

This year Agpac has expanded the initiative by introducing bright blue film and netwrap to remind men and their families about the dangers of prostate cancer.

The pink bales of baleage and pink and black striped bales of hay that appeared near highways in farming districts last year got people talking about breast cancer and raised funds for Sweet Louise, a New Zealand charitable trust that supports women with terminal breast cancer.

"Both of our suppliers will provide higher volumes of pink packaging this year, and they have also put a lot of work into developing blue packaging for prostate cancer awareness."

Dawson says the pink bale initiative was an effort to do something for women in rural communities who are often the unsung heroes behind farming and contracting businesses.

"The pink bales promotion gained a lot of support. Many of those who ordered the pink products have a wife, mother or sister who has had an experience with breast cancer."

Sweet Louise chief executive, Fiona Hatton, says she is amazed at how much traction the pink bales initiative achieved.

"In addition to the coverage in local media stories on it turned up in the UK and European media. It really took off more than we expected, which is the sign of a good idea," Hatton says.

"As a result of the pink bales campaign, Sweet Louise has established good relationships with rural women's groups and we are working on some things together.

"We also appreciate the financial assistance that Agpac has provided us through their sales of the pink packaging. They have donated about $23,000, which is very welcome at this time because this year we are going to expand our operations into the South Island."

Hatton says the work Sweet Louise does with women who have advanced diagnosis breast cancer is very difficult and often overlooked. She applauds Agpac's support for women who are struggling with the disease and for her organisation's work.

A portion of the sales of Agpac's blue silage film and blue and white striped netwrap will go to the Prostate Cancer Foundation of New Zealand.

Prostate Cancer Foundation NZ chief executive, Graeme Woodside, welcomes the initiative to increase understanding of the disease and the need for men to get regular exams.

"Recent research carried out by the University of Auckland has shown a considerably lower rate of testing for prostate cancer in rural men," Woodside says.

"This inevitably leads to some rural men having a late diagnosis, and consequently worse outcomes in their treatment.

"Early detection is the key to effective treatment. The Prostate Cancer Foundation recommends that men over 50 have regular blood tests and digital rectal examinations to check their prostate health.

"We are delighted that Agpac has taken the initiative to supply blue bale wrap in support of prostate cancer awareness to complement the pink wrap introduced last year for breast cancer."

Graeme says he looks forward to seeing farmers and contractors dotting the farms of New Zealand with blue bales showing their support, and contributing their donations to make New Zealand men more aware of prostate cancer.

My inconvenient truth - don't let it be yours!

OPINION: I felt great about turning 50.

Getting rid of on-farm plastic

The rules on waste disposal by farmers and growers are changing: the traditional options of burning and burying are no longer allowed.