My inconvenient truth - don't let it be yours! 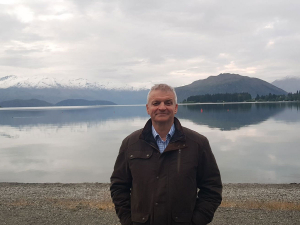 OPINION: I felt great about turning 50.

After six years, I had resigned my full-time job the day before my half century birthday. I wanted to spend my 50s doing different, adventurous things. So, I set up our exporting company and started flying regularly to China, Russia, Kazakhstan and Rwanda, to hustle and sell a range of products and do other projects in those countries.

And as I had turned 50, I thought I would get a Warrant of Fitness. I went to my GP and asked him to give me all the tests that I could possibly have. I didn't care what they were, I just wanted the lot. No exceptions.

However, when he came to tick the box on the blood test form for a PSA test, which can detect prostate cancer, his advice was that I should not have that test. He said you can get false positives and it can create unnecessary stress. He put his hand on my shoulder and said, "Conor, you shouldn't do the test". Having bee my doctor for quite some time, I acquiesced. He didn't tick that PSA test box with his ballpoint pen.

As it happened, my doctor moved on and it wasn't until four years later that I did get a PSA test.

I went to a new doctor for another matter and asked him to do one as an aside. A couple of weeks later, as I was leaving his consultancy room, he said to me the PSA results had just come back. I had my hand on the doorknob to exit the surgery. Glancing back at him I asked what it said. It's elevated, he said. I asked what that meant. He said I needed to see a specialist.

So began my inconvenient truth.

From there I had biopses, MRIs, CT/PET scans, blood tests. Eventually I was diagnosed with having to deal with prostate cancer. Even more inconvenient, after further testing, it was confirmed that my cancer had spread beyond my prostate into my lymph system. This was an added risk and complication.

Obviously, it takes time for cancer to spread. And my cancer may have had fours to do just that.

Since diagnosis, I have had an operation, six months of chemotherapy, a couple of months of radiotherapy, and ongoing hormone therapy. This is all a bit inconvenient, but it is a truth.

It is my inconvenient truth, but I don't want it to be yours. So, take responsibility and be proactive about your health.

It may or may not have made a difference if I had had my PSA tested when I did my Warrant of Fitness at 50. Who knows? However, I do know that it would at least have given a baseline from which to measure.

I would like to think that other might benefit from my experience. If you are a bloke and about 50, I would definitely suggest you get a PSA test. It's a simple tick in the box and costs nothing.

Don't get talked out of it. If your doctor says you shouldn't get a PSA test, get another doctor.

Conor English is chairman of Agribusiness NZ, president of Esports NZ, a director of Silvereye and a number of other entities.

Agpac will continue its efforts to raise awareness of breast cancer in rural communities.