NZ lamb piling on the runs in India 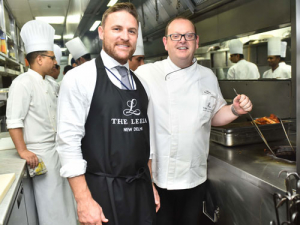 Pure South lamb from Alliance Group is now on the menu of a growing number of five-star hotels and in high-end retail stores in India as marketing in the world’s second most populous nation gathers pace.

Alliance Group and its in market partner QualityNZ have worked closely together to develop the market and have expanded the product offering to now include 10 different premium cuts of Pure South frozen lamb.

Sales are increasing in India and the 100% farmer-owned cooperative is now investing in developing the market further.

The lamb is processed and packaged at the co-operative’s plants in New Zealand before being shipped to Mumbai with French racks among the most popular cuts.

Murray Brown, general manager sales at Alliance Group says although it is a market that will take time to mature, we believe that it will one day represent a significant export destination for the cooperative.

“India’s growing middle and upper classes are showing a real interest in New Zealand lamb as a protein source and in curries and other dishes and we expect this to continue.”

Geoff Thin, CEO of QualityNZ in India, says the partnership between Alliance and QualityNZ allowed for an efficient ‘pasture to plate’ sales and distribution model where frozen Pure South product is able to be sold direct to Indian customers.

“The encouraging growth over the past year demonstrates there is potential to increase the volume of quality New Zealand lamb to India. New Zealand’s reputation for quality is highly regarded in India.

“We’re working hard with Alliance Group to develop the brand in the Indian market to a point where this additional demand will ultimately drive stronger farmer returns.

“While it is still early days for the India market, it’s clear a long-term commitment is necessary to make this a success.”

The expansion of the product range and the change in India’s food distribution channels has helped drive the recent growth, he said.

In 2013, Alliance Group signed an exclusive supply deal with QualityNZ to develop a new market for premium lamb in India with the help of former New Zealand cricket stars Brendon McCullum, Daniel Vettori, Stephen Fleming, and Sir Richard Hadlee, all of whom are ambassadors and shareholders of QualityNZ.

Fleming is upbeat about the significant opportunity for trade between New Zealand and India.

“Watching India grow over the past 15 years has been fascinating. Respecting the culture and social diversity, and building strong relationships is fundamental to having success in India.

“QualityNZ has enjoyed working with Alliance to educate and grow this exciting new market and it’s been important for us to know that behind the Alliance and ‘Pure South’ brand is a committed and passionate group of shareholders. We understand the pride that each farmer takes in producing world class product and we enjoy having the opportunity of telling that story in-market”.

In October, QualityNZ was invited to be part of a New Zealand Government delegation to the country. Brendon McCullum, was also invited to join then Prime Minister John Key as a NZ ambassador on the trip.