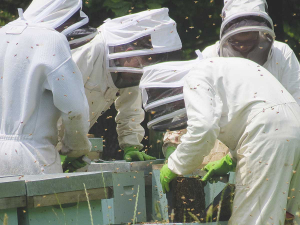 A study by medical researchers at Oxford University in the UK has shown that the symptoms of viruses that cause the common cold can be eased if a person takes honey – be it in a drink or in some other form.

Colds can’t be fixed with antibiotics, but they are still often prescribed and can lead to resistance in a person’s body.

Apiculture NZ chief executive Karin Kos says this is positive with demand for natural food driving export growth. But she says it’s been a hard couple of years for those who are not producing mānuka honeys.

“Prices for their product has dropped and sometimes to the point when it is below the cost of production,” she says.

This is of concern to the industry as a whole, says Karin Kos.

Signs of an early spring

There are signs that the honey season may be earlier than normal.

Most years the season starts in October, but beekeepers in Northland say the weather is warmer than normal and they are already getting their hives ready for the honey to start flowing.

Apiculture NZ chief executive Karin Kos says while it’s too early to say if the season will be early around the country, the signs are promising. She says, right now, beekeepers are busy checking their hives to see how the bees have come through winter, that they have sufficient food and there is no disease in the hives.

“It’s about getting the bees ready for the honey season,” she told Rural News.

While the agricultural landscape is changing, Kos says landowners, including orchardists, and beekeepers work closely together to ensure there is a good supply of food for the bees and that the hives are in the right place.

For those beekeepers who chase the mānuka honey market, it is an especially busy time as they start planning to move their hives to remote locations for the mānuka flowers. Helicopters are often used to do this.