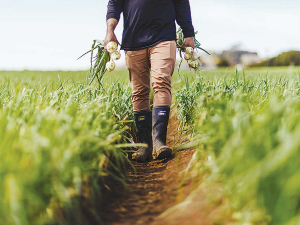 Onions New Zealand say the 2021 export season is off to a good start.

“Amongst all the turmoil created by Covid and the weather, it’s great to be able to report that exports of New Zealand onions to Indonesia are underway, two months earlier than last year,” Onions New Zealand chief executive James Kuperus says.

“Seventy-eight tonnes of onions harvested earlier in January left for Indonesia last week,” Kuperus says. “While this is small, it signals the season is underway early, and prices reflect the additional costs of growing and exporting during a pandemic.”

He says the growing season has been favourable for onion growers.

“There’s been adequate rainfall and the quality is very good. The drought in Auckland did not materialise. While water was short, there was frequent rain during the growing season.”

“This was due to the uncertainty created by Covid. However, yield is up so perhaps the season will be only about three percent down on last.”

The 2021 New Zealand export onion season is off to an early and positive start, says Onions New Zealand.

Onions New Zealand Inc says with 75% of this season's crop shipped, the industry is pleased with the direction it's heading in.

The first Onion Industry Postgraduate Scholarships have been awarded.

NEW ZEALAND ONION growers are gearing up for export markets across Asia.