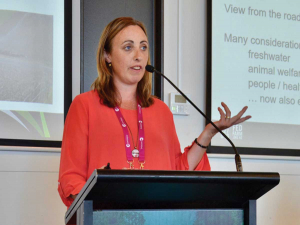 Federated Farmers Southland vice president Bernadette Hunt says farmers are angry and frustrated at the new rules, which were enacted despite the Environment Minister David Parker and his officials being told a year ago that some were impractical and unworkable on farms and will produce perverse outcomes.

Hunt told Rural News that farmers suggested numerous options, which would have produced the same environmental outcomes, but these were ignored.

She says farmers are particularly angry because the Prime Minister Jacinda Ardern is on record as saying that the country is relying on the primary sector to bail the country out of the economic crisis caused by Covid-19 by increasing production and profitability.

“Yet farmers have been given a whole lot of legislation that completely hamstrings them and subjects them to huge amounts of bureaucracy which is money down the gurgler. It makes no sense.”

Hunt says a big issue, which is causing grief for farmers, is around the rules relating to stock exclusion. She says the people who drew up the rules used data sets to identify low slopes on farms with the view to making it compulsory to fence off water ways on this land. Low slope was defined as being less than ten degrees.

However, Hunt says the problem was that when they identified a parcel of land they averaged out the slope – instead of separating out flat land and steep hill country. This has created some bizarre anomalies.

“I have heard someone who has got a property where two thirds of their farm is flat and that should be considered low slope. But the other third is steep hill country and you can’t walk on or take machinery on it. However, by applying the averaging principle, the whole farm is designated above low slope and therefore it has to have cattle and deer fenced out of all waterways,” she told Rural News.

“The reality is that you can’t even walk on some of this land yet farmers are expected to fence off the waterways. Farmers would have to hire a helicopter to fly in the fencing materials.”

Hunt says the craziness of the rules don’t end there. Under the rules a ‘wide river’ is defined as being any waterway that is more than one metre wide at any point on the property – even if it flows for just some of the year.

Hunt says this means that if you get just one rain event and the stream becomes a metre wide, a farmer has to fence that stream on the entire farm.

“That is just ludicrous when you think about these 6000 hectare properties that start off as low flats and then go way up into hill country,” she explains. “If the stream is one metre wide at the bottom and is barely a trickle further up – you still have cattle and deer fenced out of it for its entire length on that property. This is just nuts.”

She says as a result of some of the new rules, farmers who run breeding cows on the hill country will stop doing this depriving the country of quality beef for export.

Bernadette Hunt says what makes farmers angry is that when the new rules were out for consultation about a year ago it was terrible timing for them.

She told Rural News it was the busiest time of the year with calving and lambing in full swing. Hunt says, despite this, farmers sat down and wrote submissions – explaining the personal impacts the rules would have on them and why the prescriptive rules were impractical and unworkable on farm.

She says not only were the farmers’ views ignored, the officials – or whoever – took it upon themselves to tighten the rules and make these even worse.

“Some of the winter grazing rules – such as those around pugging and re-sowing dates – are totally impractical,” Hunt told Rural News.

“So farmers feel absolutely slapped in the face that they gave up their time last year to engage properly and look what’s happened. No wonder there is real anger and frustration,” she says.

Head in the mud?

While there have been ongoing discussions about the situation in Southland – and other parts of NZ about winter grazing, Hunt says there seems to be a blockage at the top – meaning Environment Minister David Parker.

“I don’t believe we are getting through to Parker on winter grazing,” she told Rural News. “I think he is hearing something about the other things – like the low slope maps which relate to stock exclusion.

“But on winter grazing he is absolutely unapologetic and seems to regard winter grazing as the most significant contributor to waterway degradation and is determined to regulate it,” Hunt adds. “I think he believes that every winter grazing operation should be consented and heavily regulated and he sees prescriptive rules as the way to achieving improved waterways.”

But Hunt believes that this prescriptive approach will not work, whereas an outcomes based system would work. She says farmers are really innovative people and as quickly as government officials are writing these prescriptive rules, farmers are figuring out how to get around them.

“That’s what I mean about perverse outcomes - so instead of focusing on doing the really good things, they are now looking at to see if there are loopholes, and there always will be.”