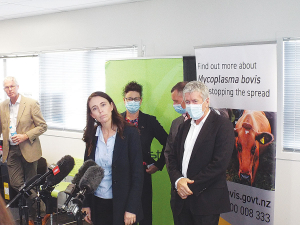 The FMD threat is on the radar at the highest level in government, with both PM Jacinda Ardern and Agriculture Minister Damien O'Connor asking all New Zealanders to play their part in keeping the disease out of the country.

There is growing concern about the risk of FMD spreading to NZ, following its discovery in nearby Indonesia. O'Connor says FMD is the "doomsday disease" for NZ and if it got here it could see animals slaughtered and the loss of more than 100,000 jobs in the primary sector.

O'Connor says the risk has increased and notes there is the possibility of it coming to NZ via Australia, because Bali is a popular holiday destination for many Australians.

"We have been aware of FMD's threats for decades and some of us may remember the horrific scenes from the UK some years ago when hundreds of thousands of animals had to be slaughtered," he says. "We have strong and multi-layered biosecurity systems and these are arguably some of the strongest in the world, but we are constantly improving these to deal with FMD."

O'Connor says vigilance about the disease is absolutely crucial for farmers and general public alike. He adds that a range of checks and assessments are being made on all cargo coming from Indonesia, which includes checking on PKE imports to ensure there is no risk to the country.

"Every container from Indonesia is being inspected with someone there on site when it's opened, to look for any risk products," O'Connor adds. "Clearly some of those containers may have come from rural areas, so it's not just their contents but also the outside of these containers that are being checked to ensure there is no trace of FMD."

O'Connor believes farmers are generally adhering to a very high standard of NAIT record keeping, but says they are also being asked to check their cattle, sheep, pigs, deer, alpacas and llamas for any symptoms of FMD.

"If they see any sign of high fever, mouth blisters, or lameness they should call their vet immediately. They should also make sure their staff are fully briefed and to be on the lookout for signs of the disease."

O'Connor says NZ is liaising closely with counterparts in Australia and he is having regular briefings from MPI as well as industry groups. He says in the event of FMD ever reaching here, NZ has access to a vaccine bank in the UK which can be called upon within a matter of days.

"With vigilance and all the systems that we have put in place, hopefully we won't have to face FMD in NZ."

The threat of FMD is on the radar at the highest level in government.

Prime Minister Jacinda Ardern says while there are no direct flights between NZ and Indonesia, strict screening measures are in place for people from that country coming to NZ. She says this includes special chemical mats that passengers from Indonesia are required to walk on as they enter NZ.

"We have also supplied Indonesia with PPE, disinfectant sprayers and other tools as well as technical expertise to help them manage their outbreak," Ardern says. "I also want to also acknowledge the primary sector groups who have been running awareness campaigns and echo what they have been saying to spread that message to as many New Zealanders as possible."

She is imploring all New Zealanders to follow good biosecurity practices and be honest and thorough in their biosecurity declarations when they return from overseas travel.

"If you have interacted with animals in a country known to have FMD then you must stay away from farms for a week and that includes lifestyle blocks," she says.

If by hance there is an outbreak of FMD in NZ, MPI will have the lead role in confirming the outbreak and offering technical advice to the Government on how to deal with the event.

However, other government department such as the Department of Prime Minister and Cabinet, MFAT, Police, MFE will all be part of the decision making process. Industry groups will also be involved.

Under the Biosecurity Act of 1993, it is the chief technical officer from MPI who will initially provide advice on the nature of the outbreak and this information will be elevated to key government officials and ministers to make calls on what action is to be taken.

Before the 1993 Biosecurity Act, the power to run the FMD response was vested in the then Chief Veterinarian Officer, employed at the time by MAF. In 1981, a suspected outbreak of FMD was found on a pig farm at Temuka in South Canterbury and all the animals on that property were slaughtered and cremated on the farm.

However, under the new act, any decision to slaughter animals would not be taken unless there is absolute scientific proof of an outbreak of FMD on a farm and at a much higher level than in the past.