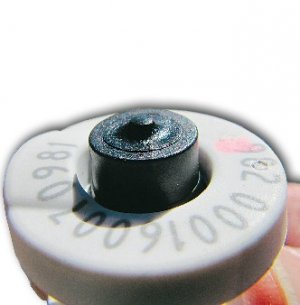 Deer farmers will soon be able to use a NAIT-approved ear tag instead of an Animal Health Board (AHB) barcoded primary tag.

From October 1, 2012, deer farmers have the option of tagging their animals with a National Animal Identification and Tracing (NAIT) scheme RFID tag, or an AHB barcoded primary tag, until deer join the NAIT scheme in March 2013.

"Deer farmers who have already put NAIT tags into their animals, or plan to do so soon, won't have to keep using AHB barcoded primary tags," says AHB operational policy manager Nick Hancox.

"The change cuts out the cost of having to use two ear tags in the lead up to NAIT becoming mandatory for deer."

NAIT ear tags will become compulsory for all farmed deer from March 1, 2013. Any existing, official ear tags should not be removed from older stock.

The AHB and NAIT have jointly agreed to the transitional ear tagging rules for deer to promote an orderly changeover when NAIT tags become mandatory.

"However, deer farmers can rest assured that the change will not jeopardise the gains made in managing bovine tuberculosis (TB). The AHB will maintain its ability to trace and identify infected animals," says Hancox.

"For this to happen, deer farmers need to become compliant with NAIT as soon as possible," he said.

NAIT Limited chief executive Russell Burnard says the changes to the tagging rules were an important example of NAIT and the AHB working together to reduce costs to farmers.

"Some farmers may wish to keep tagging animals with panel tags in addition to the required NAIT tag, so they can identify them without the need for an electronic reader. What is important is that farmers have a choice," says Burnard.

"This decision lowers the mandatory costs faced by farmers when deer join the NAIT scheme in March next year.

"NAIT and the AHB are working closely with Deer Industry New Zealand and the New Zealand Deer Farmers' Association to ensure deer farmers understand their options and their obligations when NAIT becomes mandatory.

"We encourage deer farmers to make sure they understand what they need to do to be ready ahead of time," says Burnard.

Guide to the change in deer tagging requirements

From October 1, 2012 until March 1, 2013, deer being moved directly to slaughter must be identified with either:

Deer being moved from their herd, other than direct-to-slaughter, must be identified with either:

From March 1, 2013, NAIT-approved RFID ear tags will be the only legally compliant tag for deer.