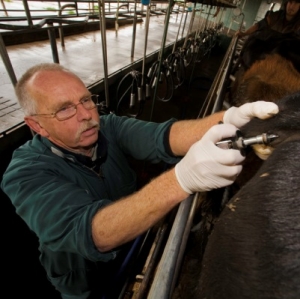 ONLY ONE bovine tuberculosis (TB) infected herd remains in Northland.

Six other herds have been cleared by TBfree New Zealand. The single, remaining infected herd has recently had a whole herd TB test and is also on the verge of being cleared of the disease. The six other herds were linked by stock movements made before the disease was diagnosed.

TBfree Northland committee chair Neil MacMillan QSM said the cooperation of farmers and landowners in allowing TB testing and wild animal control contractors' access to their properties to remove the disease was appreciated.

"The breakdown has had an effect on individual farmers and their day to day farm operations. However, quick and accurate information on livestock movements has minimised the effect on the whole farming community," says MacMillan.

National Animal Identification and Tracing (NAIT) data was vital in helping to rapidly trace movements of animals from the original infected herd, ensuring properties were put on a strict testing regime and any TB-infected cattle were sent to slaughter.

As a precautionary measure, contractors also trapped wild animals in the area to check for the disease in wildlife populations, particularly possums. Nearly 1400 possums had a post mortem, with no indication that the disease has spread to wildlife in Northland.

"While these cleared herds show the value and expertise of those involved in the TB control programme, it is a cautionary tale for herdowners that the disease is still a threat," says MacMillan.

He says the herd infections are a sharp reminder that farmers cannot become complacent and need to make wise decisions when buying and selling stock.

"You must follow the correct requirements, or risk placing your livelihood in danger through the possible spread of the disease," says MacMillan.

If you are in any doubt about a herd's TB risk status, contact TBfree New Zealand on 0800 482 4636 for information about its TB testing history.