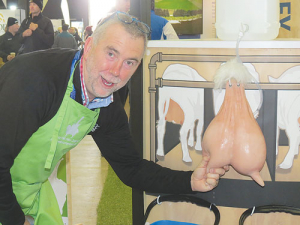 Behind the fun was positive news about the rapidly growing sheep milk industry in NZ.

He noted that people have a sort of anxiety about food, prompting them to query its health properties and ponder whether it will make them feel better. People want to learn more about products made from sheep milk, Prichard says.

The sheep milk cheese industry is growing; people like the elite products. At the same, he says, they are looking at the dairy cow industry -- labelled by some a polluter -- and comparing that to the sheep milk industry which they perceive is less harmful to the environment.

Prichard says the sheep milking industry has strong relationships with farmers, the general public and customers.

“We are connecting with people. What’s more the sheep milk industry has always been about food, not about animals. NZ farmers are in the habit of continuously thinking about production rather than the food they are producing; we are trying to make a transition [from production to food thinking] via sheep milking.”

Prichard says farmers need to talk more about food and less about animals, and ditch the ‘dollars/kilo thing’.

“That sends exactly the wrong message,” he explains. “You have to think about who you are trying to communicate with and the word ‘food’ is the one to use.”

He says the food sector has to start thinking about how people will integrate its food products into their lives. Some may choose to be connoisseurs of cheese and that is great.

“Others may respond to the industrialisation of their palette by some of the big companies in the food sector.”

Prichard says the sheep milk industry is trying to show change can happen as it uses a different animal and produces different food.