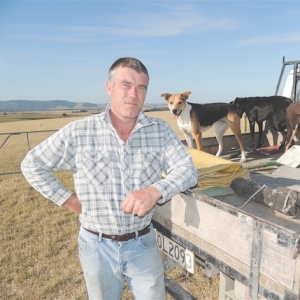 The South Island drought has already hit most drystock farmers hard in the pocket and the concern over winter feed is mounting.

“The biggest issue is most farmers have had to sell stock at much lower prices than they were expecting so financially they’re already well behind,” Federated Farmers South Canterbury Meat and Fibre chairman Miles Anderson told Rural News.

“In many cases they’re going to have to buy in feed too so their costs are going to blow out as well.”

On his farm he’s already feeding out to all ewes, using wholecrop barley silage made in December. “That was a cash [grain] crop I had to turn into feed. It was a good crop too.”

The overall feed situation in the area is already “fairly dire” and getting worse every week without good rain. Last Monday’s 10-15mm was a lifeline to brassica and beet feed crops but didn’t revive pastures which have browned off even on the most reliable south faces.

Anderson says even without the drought the winter feed situation in the area would have been tight and now winter feed crop yields will be down and stocks of baleage and silage are being eaten into already.

Most farms have offloaded young stock already, many having to sell lambs that would normally be finished as stores.

“I sold 300 stores in November for $85/head because I could see it was getting dry then, and another 200 in the first week of January for $70-71/head,” says Anderson. “We normally finish all our own lambs and buy in more to finish in the winter.”

This year that’s definitely not going to be an option but he is still hopeful his brassica and fodder beet crops will provide for his 1600 ewes and 400 replacements.

“We will batten down the hatches and try to keep hold of our capital stock. We don’t want to be in the position of having to buy back into capital stock when it rains because the drought’s so widespread it’s going to be difficult to get back in. If it was just South Canterbury you might take the risk.”

His brassica winter feed, direct drilled in November into pasture that had been sprayed out two months previously, is still only 20cm high. “After two months [growth] we’d normally expect it to be two or three times that – 50cm tall at least. But the plants are there so they should survive.”

Fodder beet – 4ha of it and the first time he’s grown it – is “surprisingly good too,” he adds. “I thought it would die but it seems to be a pretty hardy plant.”

Crucially though the paddock had been fallowed all winter so there was moisture to depth in the seedbed. “It just needs rain too.”

So far he says most farmers in the area seem to be coping with the stress.

“Sheep farmers are used to disappointment,” he quips. “But if it drags on it will be a good idea to keep an eye on your neighbours and keep talking. It’s not so bad when you realise everybody is in the same boat.”

Anderson says the drought is the worst he’s seen since returning from varsity in 1992 but his father Jim says 1969 was worse, though the current situation has similarities to how that started. “1968 was similar. The harvest [in early 1969] was good but we’d had little rain for the last half of the year, as per 2014,” he told Rural News.

“One of the things that helped in 1969 was there was feed inland and in Southland.  Now, if sheep farmers need to send stock off farm they’ll find it very difficult because of the demand from dairy.

“Personally I think it should have been declared a drought by now,” he added, before news of the minister’s trip to the province and subsequent declaration broke.

Wintering practices have changed on Robert Young's Southland farm over the past 10 years.

Future up in the air in Kaikoura

The roads to the south have mostly reopened but the uncertainty remains for the dairy farmers of Kaikoura following the November 14 earthquake.

Generators are being organised for dairy farmers in the upper South Island so that they could milk cows, says Federated Farmers North Canterbury Dairy chairperson Michael Woodward.

DairyNZ chief executive Dr Tim Mackle says while farmers in the North Island have taken a hit from the weather, in the South Island the dairy season started well.

A true terminal sire that’s gone in a hurry

Southdown breeder Chris Medlicott says farmers too often focus on the price per lamb instead of the return on kilograms of dry matter eaten.