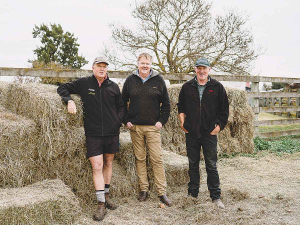 Co-chair of the Hawkes Bay rural advisory group Lochie MacGillivray (centre) says the region is now into the phase of working through the hard yards of the winter. Photo: Michael Schultz Photography.

Lochie MacGillivray, the co-chair of the region’s rural advisory group, told Rural News that despite the rain, feed covers there are a long way lower than they normally would be at this time of the year. He says the region is now into the phase of working through the hard yards of the winter.

“After the rain there was a bit of a sense of euphoria and everyone got a good dollop of rain, and because it is relatively mild and warm and the soil temperatures are still high, the response has been really good,” he told Rural News. “But I think that in week or two the reality will sink in that, even though that rain was wonderful, we are still a long way from where we want to be.”

MacGillivray says stock units are down by an estimated 50% and the feed covers are a long way lower than they would normally be for this time of the year – somewhere between 200 and 500kg lower than normal.  He says potentially many farmers in the region will hit the wall in July and August with the expected cold snap.

MacGillivray says if stock numbers were at normal levels, 700,000 bales of baleage would be required right now to feed stock. But even with the drop of stock units, Hawke's Bay still needs at least 350,000 bales to feed stock.

He believes that farmers will be applying nitrogen earlier than normal to try and get more grass to grow. Others will continue to destock and he thinks that, with other areas hit by the drought recovering, there may be a market for these.

“Unfortunately for some, they will be taking it off the backs of the stock – in other words the live weight of animals will decrease and the consequences of that will play out in the future,” McGillivray says.

“For those farmers it will mean a significant loss of animal performance and we could see ewes lambing on sub optimal covers, low birthweight lambs, poor survivability, poor milk production, low weaning weights and low percentages of weaned lambs.”

Early scanning results in the region are coming through and these are down by between 20% to 30% from normal.

“But in a bizarre way, this kind of helps the situation because if you had a high lambing percentage with low covers you could have two frail skinny lambs rather than one lamb that’s okay,” he says.

Farmers in Hawke's Bay can now apply to the local drought relief fund to pay for the cost of transporting feed to their farms.

But Lochie MacGillivray says the grants will not pay for the feed itself and that this cost will need to be covered by farmers.

The fund is open to farmers with at least 20-hectare properties who are in a position of need, and everyone who applies must have a feed plan that confirms this need.

MacGillivray says the fund is designed to support as many people as possible through the winter by contributing to the cost of transport.