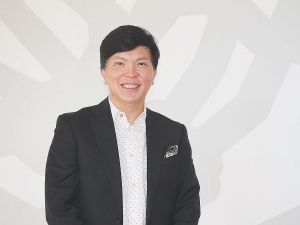 New Zealand and Australia have done “wonderful work” in their produce industries.

But after it leaves the farm or orchard it can get into the “messy middle”, says Gary Loh, a Singapore blockchain entrepreneur.

Loh says the “messy middle” can be anywhere between the farm and the consumer.

He’s had personal experience as former chief executive of fresh fruit company SunMoon Food Ltd, which he bought as a banker and had to completely turn around.

That experience led him to found DiMuto, a Singapore trade technology service company with a Track & Trace blockchain platform for the produce industry.

The “messy middle” needs to change, he says, and he wants to help solve the problems, he told this year’s PMA A-NZ HortConnections conference in Melbourne, attended by HortNews.

Disputes and problems in the “messy middle” can take 5-10% off the bottom line – they are the “pain point”.

“I had to talk to my finance team, I talked to my salesperson, I get to the shipping documents… and it all works in a manner where basically you have a barcode which doesn’t actually link it back to the documentation when you export. So you can see the batch but you can’t see the documentation.”

Examples of global trading problems include the needles-in-strawberry sabotage which happened mainly in Australia but affected export markets in Singapore, Malaysia, Thailand, Philippines and Vietnam.

Or documentation can be cleared by one government then not accepted by another.

Also, big retailers tell the little suppliers what to do but they all have different systems. Computer company consultants can be expensive just to sort out one problem with one product.

“This is the reality for us with global trade and it is such a pain for all of us.”

He says his business name DiMuto means “digital barter”, and with this we go back to the rule of the trade -- trust, he says.

“Every day I’d go to work and people tell me there’s a problem with an apple or an avocado and it is coming from different parts of the world. We needed to solve the four Ts – trace, track, transparent and trust.”

They saw the need for all records for the produce, from every box of fruit to all the documentation needed for that transaction, available in the cloud for everyone.

He says we need to close the loop. “That does not mean joining the growers to the retailers. It means being able to speak to the consumer.”

Closing the loop means being able “to take that apple, scan it and know whether it has a five star rating or not”.

Blockchain enables everyone to have the same record of transactions.

But many people are doing blockchain, he says. “We said ‘we want to be agnostic (not knowing) about what kind of blockchain you use’. We allow different systems to communicate on the platform.

“What are the benefits? It keeps track in large numbers, it is easy to verify what we see and it proves the error. One of the biggest problems, when I speak to people about blockchain, is they ask how can it error-proof the trade?

“One of the biggest problems in global trade is we could never prove the error. We did not know who, in which part of the chain, made that mistake. That was the fundamental basis of what DiMuto was trying to prove.”

It can tell you which box has the problem, Loh says.

He cites a case in his produce company of a consumer complaining about a spotty apple.

He was able to pinpoint where the problem lay, ie the retailer had not put the apples in the coolroom.