From weekend farmers to regional winners 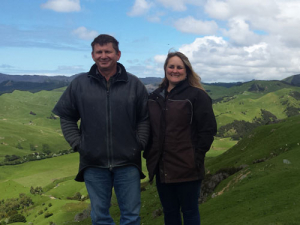 In just 14 years the Baxters have progressed from weekend farming in a partnership on a small lease block in Hawke's Bay to running their own 1740ha breeding and finishing business south east of Dannevirke.

Their win was announced at a gala dinner at the Silks Lounge at the Awapuni Racecourse in Palmerston North on Thursday night, where they also won the Beef + Lamb New Zealand Livestock Award and the CB Norwood Distributors Ltd Agri-Business Management Award.

The award judges praised the couple’s progress noting their ability to capitalise on expansion opportunities. They commended Shaun and Tracie, who operate under the business name Agri Enterprises Limited, on a property where “all facets of sustainability” could be seen.

The Baxters bought what is now their home farm, Wairakau, in 2002 with their lease partners Gerard and Shiree Hickey holding a share for an agreed period. The home farm, which was the primary subject of judging for these awards, is 700ha effective and winters 5700 stock units with a sheep to cattle ratio of 70:30.

In 2008 the Baxters leased the 280ha (effective) Range block, 20 minutes away and bought it in 2013. In 2015 they began leasing the 350ha (effective) Lakeview, 45 minutes away. This property is overseen by Shaun and Tracie’s eldest son Mark and they also employ another shepherd in the business. Second son Andrew is a shepherd on Patitapu Station nearby and daughter Nicole is in Year 13 at Feilding High School. As well as running the farm books Tracie works seasonally as a wool handler for a local shearing contractor.

The home block has 350ha of flat to easy rolling country with the balance medium to steep hill.

“This appealed from the beginning because we were clear we didn’t just want to store farm,” Shaun says. But the country tends to summer dry, so the addition of the Range block, higher back towards the Puketoi Range and summer safe, has rounded out their operation. Each block has its own capital stock but dry autumns see the shift of some home ewes to Range for the tupping period.

The introduction of Lakeview into the mix has allowed them to begin breeding their own replacements, progeny from Highlander rams over their Romney ewes. All other ewes go to terminal sires. The judges said stock were in excellent condition and there had been a significant production lift in the past five years with weaning weights and live weight gains increasing despite more lambs and calves on the ground.

Shaun attributes much of this to their sustained use of the Stockcare farm productivity monitoring programme and their switch to the Abron approach to fertiliser with humates, trace elements and lime added to phosphate in reactive phosphate rock (RPR) form.

“We switched to Abron because we wanted to look at what was going on under the ground, not just what was growing on top,” says Shaun, who now does thorough quarterly soil assessments.

“We know our soil is healthier and what we are growing is better quality feed. We are always looking for opportunities to improve, we’re never just sitting on our hands.”

Gullies with kanuka and manuka are progressively being fenced off as part of their ongoing subdivision programme. Horizons Regional Council Sustainable Land Use Initiative (SLUI) whole farm plans have been completed for each block, creating soil maps and helping the Baxters with their stock management, pole planting and woodlot planting decisions.

The judges wrote: “Their pride in the property and what they do is clear. It was a pleasure to drive around a property where maintenance and continual improvement was an obvious focus.”

The judges also noted the Baxters had extensive industry involvement including Federated Farmers and field days. They won the Tararua Sheep and Beef Farmer of the Year in 2014. Shaun won the Young Farmer of the Year in 1997 and son Mark is following in the footsteps with a Shepherd of the Year title last year. Shaun is also on the governance board for the Smedley Station cadet training farm.

As well as Baxters winning the Beef + Lamb New Zealand Livestock Award and the CB Norwood Distributors Ltd Agri-Business Management Award, a number of other category awards were announced.

Ross Collier, Pentwyn Farms, Rangiwaea, won the Horizons Regional Council Award for the Integration of Trees and the Margaret Matthews Trophy for Commitment to Sustainability was won by Max and James Corlett, Ballakara Trust, Shannon.