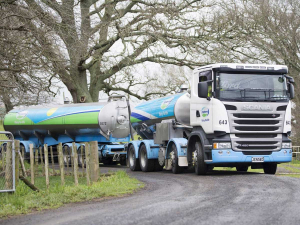 Fonterra's board is getting good feedback for listening to shareholder concerns as it works on a new capital structure.

Waikato farmer Andrew McGiven says the co-operative cannot have a 'one size fits all' capital structure.

"But at first glance it appears they have taken a lot of the shareholder feedback and concerns on board, and obviously there will be no 'one size fits all', but I think they have enough options now to crafct something fit for purpose," he told Rural News.

Fonterra is facing a challenging operating environment in New Zealand with new processing plants being set up by rivals, despite the milk pool remaining static.

The co-op faces the danger of being left with surplus stainless steel as farmers take their milk to other processors. A revised preferred option was unveiled by Fonterra last week.

McGiven says farmers realise that the national milk pool is static and could possibly shrink if impending environmental and climate regulations are implemented.

"Fonterra needs to maintain and entice suppliers to continue to be the dominant player in the NZ milk industry, if only to continue to maintain the mandate of setting the national milk price," he says. "Because if the corporates were allowed to do that, I don't think we could be enjoying the milk prices we are getting today."

Fonterra is proposing a number of changes to its preferred option released in May.

These include allowing sharemilkers and contract milkers to hold shares in the co-op if it moved to a farmer-only market.

The minimum shareholding requirement has been raised to 33% of milk supply (or 1 share/3kgMS), rather than 25% (or 1 share/4kgMS) as originally set out in the preferred option.

Entry timeframe is also being extended from five to six years. It has also extended exit timeframes for all farmer owners on the date of the vote to up to 10 or 15 years, including those who have already ceased in the past few seasons, but who still hold shares.

The co-op is also reviewing its market-maker role and looking further at how potential share buy-back options might support liquidity in a farmer-only market.

The capital structure is causing angst among farmers and has led to a slump in Fonterra share price in recent months.

Fonterra chairman Peter McBride has acknowledged the uncertainty that comes along with the capital structure review.

"We also acknowledge the significant challenges that it's creating for some farmers," he says. "The best way to give certainty is to ensure we have a full discussion as a co-op and get to a quality outcome."

He says Fonterra's board and management have consulted with over 5,000 farmer shareholders in the past three months. More meetings are planned in the coming weeks.

McBride says the board is open to further tweaks to its preferred option.