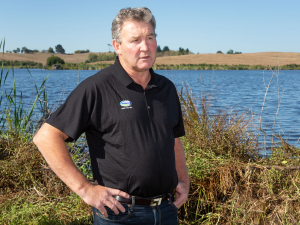 Fonterra is rejecting a Government proposal for five-metre fencing setbacks on all dairy farms.

“Within 24 months, more than 90% of those waterways were fenced,” he said.

“It’s something we should all be proud of. Instead this proposal punishes us for being proactive with little added benefit and at huge cost.

“Pulling down fences and making farmers start again shouldn’t be a priority.”

Also unacceptable to the co-op is the Government’s proposal to set ‘bottom lines’ for dissolved inorganic nitrogen (DIN).

Monaghan believes the bottom lines for nitrogen and phosphorus in rivers need to be tailored.
“The proposal must consider local contexts or ambitions, and should be backed up by analysis of the economic cost to individual farmers, our communities and wider regional economies,” he said.
“In the current proposal, farms in some parts of New Zealand would have to make nitrogen reductions in excess of 50%. We would expect robust analysis to justify this decision.”

Monaghan says Fonterra supports the Government’s overall goal to improve freshwater.
“Every dairy farmer understands the importance of freshwater to our businesses and our communities,” he says. “We all know NZ can have both healthy freshwater and a thriving agricultural economy.”

But he wants people to take the emotion out of the debate and make these critical decisions based on science, data and facts.

“There is a lot of emotion on all sides of this debate, and rightly so.  New Zealanders are passionate about the environment. But at the end of the day we all want the same thing: clean, thriving freshwater existing alongside a thriving farming economy.
“There are a number of proposals we support and we will work with you to help you meet these.”

In particular, Fonterra welcomes the Government’s acknowledgement of the value of farm environment plans (FEPs).

It wants the Government to go further and make them mandatory for all farmers and growers. About 23% of Fonterra farmers already have a FEP tailored to help them farm within environmental limits.

• Reduce water use and improve wastewater quality at manufacturing plants

• Work together on waterway health

• Invest in science and innovation to find new solutions

• Make the products people value most.