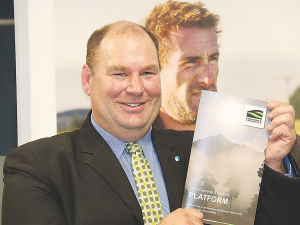 If rural broadband isn’t improved quickly it will become even more challenging for farmers to comply with new environmental rules and regulations.

That’s the view of Federated Farmers president Andrew Hoggard who, last week, launched what the farmer lobby calls its General Election Platform 2020. This is what Feds used to call its election manifesto and is designed to tell politicians what policies farmers want adopted by an incoming government.

Its main wish is for telecommunication systems for rural regions which match those in urban areas. Other policies include:

• Building regulatory and science systems that empower environmental gains rather than stifling enterprise and innovation. This includes the recalibration of current essential freshwater settings; which Feds say will stifle economic and employment growth – except for planners and lawyers.

• Getting more kiwis to work on farms and recognising the important role of migrant workers.

• Ensuring the right trees are planted in the right place and preventing good productive land being gobbled up for forestry.

Hoggard says quality connectivity remains a very high priority for the rural sector. He told Rural News that this became particularly evident during the Covid lockdowns, when many people returned to farms to isolate and create their own family bubble.

“That put a huge strain on the connectivity in rural areas because you had a whole lot of people trying to carry on with their studies at school or university or jobs in town,” he says.

“But the countryside didn’t have the bandwidth to cope.”

Looking ahead, Hoggard says farmers are being asked to do a lot more in terms of monitoring what is happening on their farms. However, he believes that unless rural areas get the necessary connectivity, doing this will be an absolute nightmare.

Hoggard says the problem is not just confined to the rural sector.

Fed’s 28-page glossy document contains a wealth of useful information. While it focuses on the farmer lobby’s ‘wish list’, it does contain some insightful information about the primary sector. Hoggard says it is designed to help elected members of Feds explain to politicians and others just what the organisation actually stands for.

“Often a lot of people like to have their version of what we stand for, but this document clears up any doubts they may have.”

Hoggard says in the current political environment there seems to be a dearth of policies and no shortage of scandals.  “For those that lack policies we have a very simple answer – our manifesto,” he says.