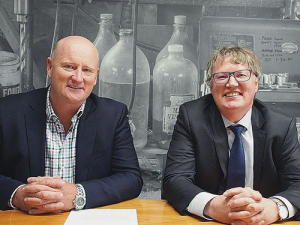 Chairman Lachie Johnstone described it as “another positive result for its shareholders”, with revenues reaching $2.39 billion -- 10.71% higher than in 2017.

Farmlands also made a profit of $12.2m, at least double the $5.4m it posted in the previous financial year.

“Our staff have worked hard this year to deliver $91m of rebates throughout our store network, the Farmlands Card and our Fuel Card. This adds to a bonus rebate of $6.1m to be distributed to shareholders as 50% cash and 50% bonus shares.”

Reidie says Farmlands won several awards during the year, which showed the co-op is heading in the right direction.

“We have been investing in our people to better serve our shareholders. Winning the KPMG Customer Excellence Experience Award, in particular, was a great boost for our staff as this was our shareholders telling us we were doing a great job servicing them.

“To come out as the number-one brand in New Zealand for the global KPMG Award against Air New Zealand, Kiwibank, New World and ASB is tangible proof that the co-op is moving from good to great in line with our strategy.”

Johnstone said Farmlands has 3% more shareholders, which he described as a key indicator of its relevance to its customer base.

“We have witnessed a healthy turnout of candidates for the three board seats open to election this year by rotation. We have 11 shareholders running for three seats – two in the South Island and one in the North Island.”

Farmlands will farewell three long-standing directors at this year’s annual meeting on Friday November 23 in Hokitika. Joe Ferraby from Seddon, David Jensen from Tauranga and independent director Peter Wilson are standing down.

Johnstone said Rob Hewett is seeking re-election and the board is in the process of selecting a replacement independent director, to be announced soon.

Changes ahead for Farmlands

Shareholders in the farm services co-operative Farmlands will be voting on the first big change to its constitution since 2013 at the annual meeting to be held in Hokitika on November 23.