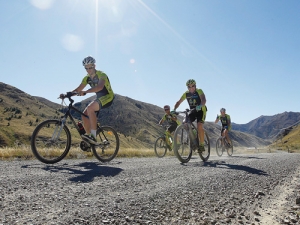 Rural News caught up with the peloton on the most ambitious part of the cycle tour – Molesworth Station.

It's hot, it's dry and these farmers are sucking in lungfuls of dust from every passing vehicle, but they don't care, they're on a mission for all farmers.

Twenty farmers make up the peloton on the inaugural Farmstrong Fit 4 Farming national cycle tour travelling the length of the country.

Rural News caught up with the peloton on the most ambitious part of the cycle tour – Molesworth Station.

It's fitting that a cycle tour for farmers should visit Molesworth – New Zealand's biggest farm; at 180,000ha it is home to NZ's biggest herd of 10,000 cattle and stretches from Canterbury to Marlborough.

The road from one end of the station to the other end is 82km and it is one of NZ's toughest roads. It is open to the public in summer, but only 7am to 7pm.

Alongside the road high voltage direct current pylons take 1200 megawatts of power from the Waitaki Hydro Scheme to the North Island. The gigantic cables carrying enough electricity to power two Wellington-size cities had a crackling hum, quite apt as the temperature climbed into the high 20s.

The cyclists didn't stop at the end of the station however; they pushed on for another 26km over Jacks Pass into Hanmer Springs to rest for the night before going on.

The 20 riders cycled from Ngatea to Invercargill from March 18 to April 2 to promote the need for farmers to look after their physical health so they can live and farm well.

The peloton rode 30,000km (excluding their preparation riding) and contributed towards the Farmstrong Challenge goal of 4 million km cycled by July 2016.

The Fit 4 Farming Cycle Tour, developed by farmers for farmers, is the brainchild of former farmer Ian Handcock and his charity Fit 4 Farming.

Handcock is a dairy consultant in Thames, aiming to improve the health of New Zealand farmers through exercise.

Horrified at the discovery that 75% of dairy farmers are at risk of cardiovascular disease, he committed himself to improving the wellbeing of farmers.

"Exercise helps release stress," says Handcock. "If you're feeling stressed do something physical."

Five regional event days were held in Waikato, Taranaki, Manawatu, Ashburton and Invercargill. The public and farmers were invited to take part in activities including a 5km run.

Dairy farmers Neil and Glenda Gray are ready to swap the paddock for the tarmac as they prepare for the Farmstrong Fit4Farming Cycle Tour.

Ian Kirkpatrick wears Lycra and he's not afraid to admit he rather likes it.