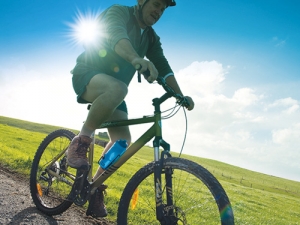 Ian Kirkpatrick wears Lycra and he's not afraid to admit he rather likes it.

The thought of the All Black's legend as a MAMIL (middle-aged man in lycra) might be hard to digest, but he is a devoted cyclist. Wearing bright coloured clothing is one of the occupational hazards.

"It keeps you from getting a sore backside."

And getting farmers off their backsides is one of Kirkpatrick's main motivations while he prepares for next year's Farmstrong Fit4Farming Cycle Tour.

The ride from Waikato to Invercargill is to help highlight the benefits to rural communities of being active.

Kirkpatrick rides about three times a week. He's done so for several years.

Running became "too hard on the limbs". And he has always been active, even long after retiring from rugby, and found cycling was a good compromise.

It wasn't as hard on his body and was an excellent way to stay healthy.

"Farmers are generally pretty fit because they have a physical job," he said.

"But shearing and fencing will only get you so fit. Farmers need to be doing a bit of cardio-vascular work too. Going for a run is a great way to get off the farm and a form of exercise, but for us older blokes biking or just walking is good too," he told Rural News.

"I often see older blokes still running. They are bent over and struggling. I don't understand that. You're much better off taking it easy, trying to enjoy your exercise rather than busting your gut. It's better for you which is what it's all about."

Kirkpatrick sold his farm about two years ago. He still lives on the property near Gisborne. But he and his wife will shortly move into a new house just outside of the city. Kirkpatrick will join the peloton for the first two stages of the cycle tour – a distance of around 300km from Ngatea to New Plymouth.

"I reckon all farmers should look into Farmstrong and take on the simple tips it promotes about getting off the farm and checking in with mates and neighbours," he says. "I challenge all farmers to get involved with the Farmstrong Challenge and see how many kilometres you and your mates can do."

Farmstrong ambassador Ian Handcock says Farmstrong has set a collective goal for all farmers and growers.

The challenge is to head to the website and pledge a set number of kilometres you're willing to exercise – cycling, running, walking or swimming. The goal is to have travelled four million kilometres by June 2016.

Coping better with ups and downs on farm

The importance of seeing regularly to your wellbeing will be the focus of Farmstrong’s site at Fieldays.

Organiser of the rural wellbeing programme Farmstrong say it has exceeded expectations in its first year, supporting on average 1000 people each week to live and farm well.

Comedy and musical group ‘Sons of a Bitch’ and singer Mel Parsons are preparing for their North Island Woolsheds Tour starting October 19.

It's hot, it's dry and these farmers are sucking in lungfuls of dust from every passing vehicle, but they don't care, they're on a mission for all farmers.

Dairy farmers Neil and Glenda Gray are ready to swap the paddock for the tarmac as they prepare for the Farmstrong Fit4Farming Cycle Tour.