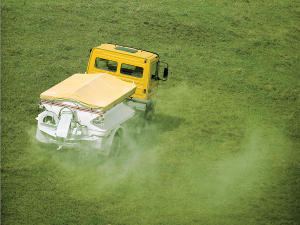 Harry Clark says while reducing synthetic nitrogen fertiliser would lower emissions, the commission is unsure if the impact of this would mean whether farms would continue to be viable.

Greenpeace campaigner Christine Rose asked why the Commission was ignoring the report.

“Why did it prioritise the maximum of milk production ahead of cutting greenhouse emissions – the exact opposite of what it was supposed to do,” Rose asked. “Who does it work for: New Zealand or Fonterra?”

She claimed that when applied to land, synthetic nitrogen fertiliser emits more climate pollution than all of New Zealand’s pre-Covid domestic flights.

However, the report is available to the public on the Climate Change Commission’s website.

It states that: “Reductions in synthetic nitrogen fertiliser can be part of the combination of management practices associated with reducing on-farm emissions. These also include adjustments to supplementary feed use and stocking rates, which are tightly coupled to fertiliser use.”

This is similar to the advice provided to Parliament in its final report in June.

This quotes a study from the Fertiliser Association of New Zealand, which modelled the potential impact eliminating synthetic nitrogen fertiliser from different farming systems. While the study claims eliminating synthetic nitrogen fertiliser would reduce emissions by between 10% and 31%, it would also require a reduction in stocking and therefore milk production.

“But what we can’t be sure of is what the impact of this sort of sudden change would mean for people, and whether many farms would continue to be viable,” Clark told Rural News.

He says that the agriculture sector, economy, and rural communities and households that would be impacted must be supported through these big changes.

“We asked ourselves a series of questions when developing our advice. Is this ambitious enough? Is it fair and equitable? Is it technically and economically feasible? Can it be achieved through policy?”

Clark says the Commission’s advice to government is that changes need to be made to the way New Zealanders farm.

“We have made recommendations around changing farm practices – this could be changing stock levels, reducing supplementary feed and reducing synthetic nitrogen fertiliser.

“Our advice sets an ambitious level of change across every sector – including agriculture. We will continue to look at synthetic nitrogen use in our 2022 advice on progress against pricing agricultural emissions, and in our subsequent budgets.”

Farmers are happy to play their part in reducing greenhouse gas emissions but the Government has to come to the party.