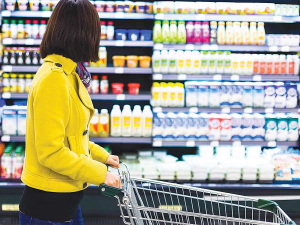 ASB economist Nat Keall says strong demand from China has fuelled gains at GDT auctions over the past three months.

“Domestic consumption has risen steadily over the course of 2020 as the Chinese economy has picked up, but domestic stockpiles haven’t managed to keep up, despite aggressive purchases through most auctions,” says Keall.

He points out that analysis by dairy advisory services company, HighGround notes that while consumption in China is up 16% year-on-year, inventories for whole milk powder (WMP) have started to drift down toward year-ago levels.

With Covid-19 under control, China was the only major global economy to grow over 2020.

Importantly, as the economic momentum has continued into 2021 household spending has gathered steam.

But there are fears that should Chinese demand for NZ dairy wane, prices could drop.

Open Country Dairy chief executive Steve Koekemoer told suppliers that some concern has been raised due to demand predominantly coming from Chinese buyers. But he added that domestic milk production and processing in China are still a lot higher than purchasing from overseas, which has underpinned the demand.

“Our expectation is that prices will level out and that we might see a little softening moving forward, as we have reached a critical benchmark,” says Koekemoer.

“Regions outside of North Asia are more hesitant to buy at the current elevated levels and should Chinese demand start to wane, the market would need them to start buying, which they would likely only do after a downward price correction.

“Nonetheless, the future looks bright, even if prices had to retreat slightly. We should see other regions come to the table preventing any serious decline.”

Penny notes that growth in South-East Asian economies is not far behind, further underpinning demand for New Zealand products.

“The global rollout of Covid vaccines will give global food demand a second ‘shot in the arm’, particularly from other secondary dairy markets,” he says.

Global dairy prices have continued their golden run, with the Global Dairy Trade auction recording its seventh consecutive rise in the price index.