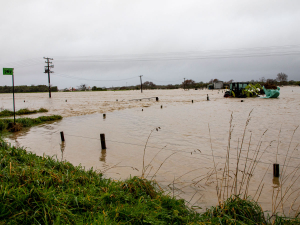 The impact of the flooding in the Buller region can be seen on Joan Hamilton's farm, on State Highway 67A, heading out to Carters Beach, near Westport. Photo: Jules Anderson Photography.

The recent floods caused stock losses, ruined pasture and damaged sheds and tracks on about a dozen farms in the district.

This latest flood is being described as the worst anyone in  Westport has seen in their lifetime but most of the damage is in the town rather than in the rural areas.

Agriculture Minister Damien O’Connor who comes from that town says more than a dozen dairy farms have been damaged – some severely. But others escaped the effects of the deluge and the floods are seen more of an urban rather than a rural disaster.

He says one farm in particular was badly hit with large numbers of cows drowned in the raging floodwaters and  says the same farm suffered major pasture and infrastructure damage and noted the ability on that farm to milk in the coming weeks might be limited. He says he expects stock losses to be in ‘the hundreds’.

“I have spent the best part of a week in the Buller area and what I saw on the north side of the river was some pasture damage and fences that needed repairing but the chances are farmers will be able to graze their stock on these pastures during spring provided there is some fine weather. But there will be some on the south side of the river and in the gorge who may not be able to get production out of that land for five or six months,” he says.

Among the worst affected dairy farms is one owned by Damien O’Connor’s brother Bede where up to 40 hectares of the farm is covered in silt – in some places half a metre deep.

“My brother has indicated that he will have to sell cows  and make adjustments for next season,” says Damien O’Connor.

Landcorp which owns seven farms at Cape Foulwind just 10kms west of Westport says its farms were virtually unscathed by the floods. They have been helping other farmers with the clean-up operation and have made available any surplus accommodation it has at its properties.

Meanwhile DairyNZ has been busy working with other primary sector groups to help dairy farmers get ready for calving.

It’s head consulting officer in the South Island, Tony Finch says his first priority has been to get an accurate assessment of  the extent of the damage on the farms affected by the floods. He says the silting issue on farms has created all sorts of challenges and the objective is to get the land back to its productive capacity as quickly as possible.

“We are on the cusp of calving and in a couple of weeks there will be a lot of calves on the ground so right now there are a lot of heavily pregnant cows around. For DairyNZ it is around how we give those farmers as much support as we can to help them recover through this challenging time,” he says.