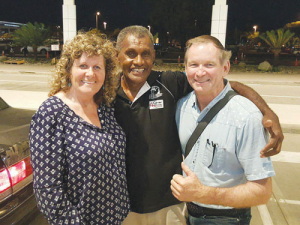 Lynette and Rex Smith with David (Tevita) Draunimasi who lost an arm in a tractor accident many years ago. He does all the tractor work on the farm. One of David’s sons, Sailasa, is farm manager.

It's a completely new area for the couple. Rex might know a lot about fishing but farming is a new venture for him.

Rex is still hands-on operating the Serious Fishing charter from Gulf Harbour, just north of Auckland, while project-managing the beef operation by phone. He admits at times it has almost driven him to despair.

The venture has also involved up to four trips a year to Fiji for the couple — often carrying more than 100kg of luggage – plus various other shipments. Although there are other beef farms in the island nation, less than two years ago they became the first foreign beef investors in Fiji and use entirely Fijian labour, who need training in farm skills.

The Smiths have been active in community aid work in Fiji for 10 years through the Auckland Christian Assembly church, working with water supply, buildings, small business opportunities and youth education plus much more.

They wanted to help local Fijians into a cattle farming venture, but it became apparent after visits to the agriculture department they could not do this.

“The only way forward was to create a company as a licensed foreign investor in Fiji. This proved to be a challenging and time consuming process, running between the Companies Office, Foreign Investment Fiji, lawyers, banks, Customs & Revenue, Health Department, local council, Agriculture Department, occupational safety and health, police, immigration, etc, this list went on,” Rex told Rural News.

“There were months of dealings with authorities before we could start.”

Once sorted, they settled on a 42ha property in the Tuva, Kabisi/Dayala district for stage one. Although road access is challenging, it has a good water supply with easy terrain.

“Having been an old cane farm previously the grasses and trees had re-grown out of control, no fences, power, gates, troughs, etc,” Rex said. “This was perfect for the team of eager Fijians wanting to make a name for themselves breeding cattle.”

The first project was fencing and stockyards as they had no way to control cattle.

“Everything has had to be done by hand, digging all the yard poles, fence posts, carrying all the timbers, etc. A truly massive task in 30°C plus temperatures, with early morning starts and late finishes in the dark. We felt like pioneers starting with nothing and basic tools.”

Lynette went canvassing local farms for breeding cows and bulls. “This proved an interesting experience; once word was out that a ‘vavalagi’ wanted to buy stock, everyone wanted to sell animals.”

The opportunity arose to get a Limousin bull with cows and a few heifers.

“The beginnings of a farm were born. Since that intense start a lot of time has been spent on water reticulation, fencing and stock yards,” says Rex.

With no electricity, water was a big challenge.

“A Glockemann pump from Queensland was flown in. This piston diaphragm pump sits in the stream using water to push the diaphragm and piston. It has the ability to move water over long distances and big elevations, pumping water to a storage tank at the yard nearly 600m away and 60m higher. The water can then be gravity fed to other parts of the farm including into another valley where a windmill moves the water another 30m higher and another 400m further up a hill to another storage point to be gravity fed from again.

“This was tricky and hasn’t been easy to achieve as there are few resources available in Fiji.”

The windmill came from a farmer at Karamea and was cut up so it could be flown as excess baggage to Auckland for later shipping to Fiji.

Rex and Lynette have flown four times a year to Fiji carrying with them 100s of kilos of baggage and several shipments of implements, a head bail, cattle scales, generator, gate hinges, wire strainers, etc.

There are plans to re-pasture about 18ha of the initial block with fodder grasses but Fiji biosecurity has put the brakes on this, he says.

“With seed supply very scarce, we are now embarking on planting Mulato II by hand in prepared ground as the rainy season arrives. This grass will be coming from another farm under an agriculture programme.

“Fencing has been quite a challenge, as you can’t just rock on down to the local farm supplies and grab what you want. Wire is always in short-supply, fence posts are expensive and not always available. The posts are harvested from the bush (certain trees won’t rot) but may sprout when planted in the ground; battens are also cut from the bush.

“Getting the workers to understand how to make a robust fence was an initial problem but now that is sorted we have good strong boundary fencing.”

Using an old Ford 4130 tractor to do mulching, access road maintenance and moving supplies around, the farm progress can be slow.

Rex and Lynette are sending up a Mahindra tractor in December to complement resources. Mahindra is making a name for itself in Fiji and its tractors are readily serviceable there, Rex says.

Pour-on drench is not available in Fiji — only oral. Their company Lyzacare has introduced bands for horn removal, a subtle and painless system that works well.

Having a modern head bail from Stronghold has proved to be a winner, as the previous head bail was too small and clumsy. Their farm is the only one with cattle weigh-scales in the race.

“We have a fantastic team of workers; nothing is ever too hard to do.

“The long term plan is to create a viable working cattle farm with sheep to come later, giving employment and improving lives in the district as well as hopefully getting a return on investment.

Their hope for the future is that, with help from New Zealand and the Ministry of Foreign Affairs and Trade (MFaT), an embryo implant process may help fast-track the venture. MFaT has so far not looked favourably on the project because it is self-financed, but Rex hopes they will change their minds as the farm gets established. The Fijian Government is keen to see growth in the agriculture sector, especially livestock.