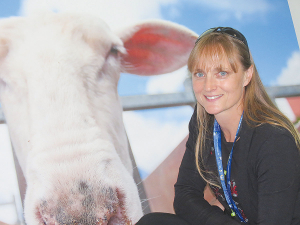 Sue McCoard has been named 2022 winner of the prestigious McMeekan Memorial Award.

“I am truly honoured to receive the McMeekan Memorial Award,” said McCoard, who is the first female recipient in its 47-year history. “It is an even greater honour to be placed in such distinguished ranks as those of the past honourees.

“Science is a team effort and I have been very lucky to work with a whole bunch of wonderful people, both within AgResearch and around New Zealand and the world”.

In a 20-year career at AgResearch, McCoard has conducted both fundamental and applied research, mainly in the area of early life nutrition and its impact on lifetime performance of ruminants – including their survival, growth, health and meat/milk production.

McCoard believes the award also recognised the strong working relationships she has developed with stakeholders and end-users, including farmers.

She told Rural News that partnerships between industry and science are particularly important to enable robust relevant science to be undertaken, and to support its uptake on working farms. For example, the development of a range of lamb rearing system options for both the dairy and meat sheep industries. For the future, McCoard says her research interests fall into four key areas:

The NZSAP, recognised as New Zealand’s major forum for the presentation of research results on farmed animals. The award is to honour an outstanding recent individual or joint contribution to animal production or to the Society. It’s named after society foundation member Campbell Percy “Mac” McMeekan (1908-1972), who was instrumental in the development of Ruakura.