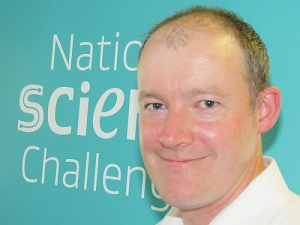 AgResearch’s Richard McDowell is head scientist on the project.

$230 million is being spent over the next 10 years to produce definitive science on how to best manage land and water in New Zealand.

The project will be funded by the Government, six Crown Research Institutes and five universities.

The project called 'Our Land and Water National Science Challenge' was launched last week in Wellington by the Minister of Science and Innovation Steven Joyce, who described it as the most important of all science challenges undertaken so far.

In the process of scoping this science challenge, it was found that collectively about 350 individual scientific research projects were underway with a focus on land and water management. The aim of this 'science challenge' is to eliminate duplication and develop a 'NZ-Inc' focus on best outcomes.

Joyce says the world wants much more precision and so science is going to have to stand up and answer some questions. He also noted the danger that the need is getting ahead of the science. Joyce is confident the science to emerge from this project will solve political and economic challenges.

"Over the last few years I have seen enough of the work done to know there is a scientific solution to the improvement of productivity and improving environmental outcomes," he says. "What I think is so exciting is that this is doable. Our challenge now is to develop those tools in such a way that they can be applied economically."

Joyce says the science gathered and the tools created as a result of this project will help in the political issues of water allocation. Most of the politics arises from the scarcity of water, he says. If better ways can be found for achieving good outcomes by using less water, good economic outcomes will result.

Joyce says NZ must get this issue right and he called on those running the science challenge to be unafraid of stretching the boundaries and possibilities.

"It is important that a national science challenge is not business as usual, but instead looking out five-ten years. We don't want more of the same. We want things that stretch us or are ground breaking."

Scientists and universities team up

Head scientist for the project is AgResearch's Dr Richard McDowell, a soil and water specialist at Invermay, with hundreds of other scientists.

McDowell says his role is to bring together an enormous group of highly intelligent people with a wide range of science knowledge and skills and to get them to work for a common goal.

"The role is similar to that of a player coach," he says.

The project has short, medium and long term goals. The short term goal is likely to have a huge impact on how regional councils deal with land and water issues – changing emphasis from the present 'land capability' to 'land suitability'.

McDowell says the 'land suitability' approach is to create a tool backed up by hard data that gives people confidence to instigate right land use at the right place at the right time and with the right outcome.

"That outcome could be profit in a certain part of the catchment or it could be tourism in another part; saying what can be grown where and more towards the suitability of a particular crop in terms of its profitability and environmental footprint, in the locale where it's grown and in its wider catchment.

"For example, do we want to grow a crop just for profit or are we able to accept 10% less for a 50% reduction in the environmental footprint in that catchment."

McDowell says the overall goal is to improve the total value of production in NZ while at the same time improving land and water resources.