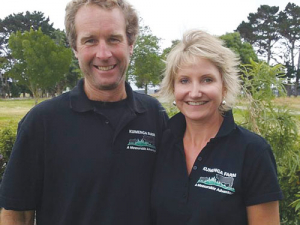 Benchmarking themselves against other farmers was a big plus in entering the Ballance Farm Environment Awards, say Wairarapa farmers Mike and Liz McCreary.

The McCrearys annually finish about 30,000 lambs and up to 1500 bulls and crop on their 618ha (540ha eff) property on the south-eastern shores of Lake Wairarapa. They bought the farm with Mike’s parents Rob and Heather in 2008. They also own and run McCreary Machinery, doing minimum tillage ground and arable work and baleage.

McCreary says the feedback and comments of the awards judges, during the first and final rounds, opened their eyes to some things they were unsure of, such as technology systems and plantings.

“We have an intensive farm. Our ability to back-fence efficiently and spread nutrients evenly across the whole farm has been a credit to our farm design, which was built by Tom Chisholm. Our nutrient footprint on the land is light for an intensive system.”

McCreary says the judging included a lot of conversation.

“It was a fairly rounded process, not tedious or something to fear. They kept us being ourselves as we went around so we could share our farm with them.

“It was a neat thing to involve our staff; involving them in the judging has given them more insight and appreciation of the environmental reasons behind what we’re doing.”

The McCrearys took the whole team to the awards dinner. “It was good team building and the recognition was rewarding for them.”

McCreary says they had entered a few times before, but had not followed through.

“It’s a busy time of year and we’re usually running thin on the ground. But this year we had the right headspace and the right staff and even though we were still busy at the time we made it fit.”

Entering again is on the cards, he adds.

McCreary says the farm had no stock water reticulation when they started but now they have only 60ha to finish.

“We want to finish the stop-banks and fencing and planting around the lake edge. We’ve moved 60,000 tonnes of dirt out there. We’ll split off the lake edge and take our stock out of the waterways and I think we’ll have another shot [at the awards].

“We understand the process better now and will present our business to the judges better next time. Financially we were under the pump and we’re getting on top of that as well. In three years we’ll be in a totally different space.”

Greater Wellington Regional Council, a supporter of the awards programme, plays a big part in the success of their business, McCreary says.

“We all have to be aware of the environment and our effect on it. Our council is doing a great job to help, particularly Richard Parkes and Tony Faulknor and their crews. We’ve planted 29,000 trees and fenced waterways and never could have done it by ourselves. They help with releasing and planting and organising everything. They’re breaking down the barriers between council and farming.”

McCreary also recognised the work they do with Louise McCormick from Ballance Agri-Nutrients and Stephanie Sloan from PGG Wrightson in matching soil types and nutrient requirements.