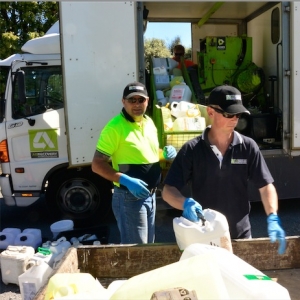 Agrecovery is reminding farmers of its free waste collection sites where plastics and other farm waste can be disposed as an alternative to burning or dumping.

The reminder comes after the release of a study into rural waste showed that many North Island farmers are still burning or burying waste plastics, despite the availability of collection sites and services.

The study, commissioned by Bay of Plenty and Waikato Regional Councils, surveyed 69 properties and recorded 2,564 tonnes of rural waste with an average 37 tonnes generated per property each year.

The waste in the BOP and Waikato study ranged from various types of plastics, scrap metal, timber and fence posts to glass, batteries, construction and demolition material and domestic refuse. Many property owners dealt with it by burying, burning or bulk storing it on site.

However, the not-for-profit Agrecovery say there is a better solution to the problem. With more than 70 collection sites at several accessible locations across rural New Zealand and regular collection events or on-property collection for large users, farmers should look at recycling their waste instead.

“Thanks to a commitment to good product stewardship by manufacturers and distributors, farmers can recycle their empty plastic containers from more than 3,000 commonly used products for free.  This eliminates the need for unsustainable practices such as burning or dumping,” says Graeme Peters, chair of the Agrecovery Foundation.

In Canterbury, a similar study in 2013 reported comparable results to those found in BOP and Waikato. With 53 farms surveyed, the study found that overall waste generated by Canterbury farms was around 209,000t each year, roughly equal to the amount going to landfill from Christchurch city in 2012-13.  According to the report, the bulk of that waste (92%) is either buried, burned, or bulked stored over the year.

“Since their report was released in 2013, Environment Canterbury introduced a ban on burning agricultural plastics.  We believe this was responsible for the 113% increase we experienced in container recycling in the Canterbury region in the first six months following the ban, compared to the same period in 2013,” says Peters.

“It proves that farmers will increase their use of sustainable disposal methods with the right combination of incentives in place, such as bans and free recycling.”

Agrecovery offers recycling and recovery programmes for plastic containers, drums and unwanted or expired chemicals.  Nearly 10,000 farmers and growers use the programme.

Working as a farmer and fencing contractor for 15 years made Jerome Wenzlick very familiar with fence posts — now he's “saving the planet one post at a time”.

Dairy Woman of the Year Trish Rankin has a message for all farmers: recycling systems work and it is worth doing your bit.

A new project launched this week provides farmers alternatives to the harmful disposal practices of burning, burying and stock-piling of waste.