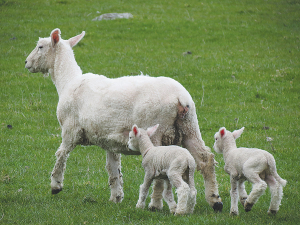 Hogget breeding can be used to increase the total number of lambs weaned on a farm each year if managed correctly.

This is if the farm is already achieving a lambing percentage of 132 with their mixed aged ewes – as long as the hoggets achieved at least 26%.

This low figure not only signals how easy it can be for many farmers to be profitable with hogget breeding. It also shows that farmers can focus only on a small percentage of their overall hogget flock and aim to achieve high levels of performance in only these sheep and still be profitable.

This targeted approach is likely to suit for many farmers, who are concerned about the risk of putting a large proportion of their hoggets to the ram.

Interestingly, the modelling also showed that for a farm achieving 132% in its mixed aged ewes, to have the same cash operating surplus as a farm which did not breed hoggets, but had a mixed age flock achieving 152 percent, hogget breeding would need to be at above 100%.

This is an unlikely scenario and many farmers would argue it would be easier to increase the performance of their mixed age ewes to 152%, than to achieve 100% lambing performance levels in hoggets.

There are a few simple rules that farmers should follow in the April/May period if hogget breeding is to be successful.

Hoggets can be exposed to teasers to increase the percentage successfully bred in the first 17 days of breeding. If teasers are to be used, it should be for 17 days only, and at a minimum ratio of 1:100 – although they can still be effect at ratios of 1:200.

Recent research suggests that hoggets need to be a minimum of 43 kg at breeding, for a flock with a mature ewe breeding weight of 65 kg. This minimum is an individual minimum, and not a flock average.

There is also a suggestion that this minimum could be raised, and research funded by Beef + Lamb NZ is examining the potential impacts of heavier breeding weights.

Farmers need to be brave enough to not breed those hoggets that present too light at ram introduction, as breeding light hoggets increases the risk that they will not last five to six years within the flock.

Alternatively, if farmers use body condition scoring as a tool to select hoggets suitable for breeding, they need to be a minimum of 2.5.

Hoggets are shy breeders, therefore an ideal mature ram to hogget ratio is 1:50. Hogget rams are far from ideal, but if used the ratios need to be even lower.

When choosing a ram, farmers need to consider the potential impact on birth weight and frame size and therefore dystocia. Sires or breeds that are likely to produce large heavy lambs at birth are not ideal.

Hoggets need to gain approximately 20kg in total weight during pregnancy, which includes the weight of the placenta, foetus and associated fluids.

This is a significant amount and equates to 130 g/d total gain throughout the breeding period and in pregnancy. This allows for the hogget, herself, to grow and for the appropriate level of development for the foetus(es). Therefore, farmers need to have a plan for feeding their ewe hoggets appropriately throughout the mating and pregnancy period. This needs to have begun by April.