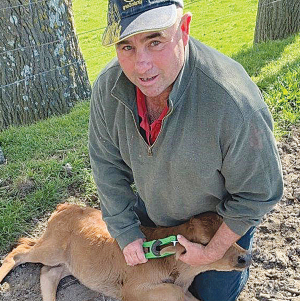 What is your farm set-up?

I’ve got about 320 crossbreds on 116ha.  I rear my surplus calves, sired by Hereford and Simmental bulls. When these calves are 100kg they’re sent off to a nearby beef farmer who also grazes my dairy heifer replacements. The current calves are due to go in November for fattening. After two years, the beef farmer sends them back as in-calf dairy heifers and they join my milking herd.

How many NAIT locations do you have?

Just my farm at Te Puke. I used to have a run-off block but nowadays it’s easier to manage the one location.

Who manages your NAIT obligations?

I prefer to do it myself after my experience of delegating to others. While many dairy farmers are using apps on smartphones, we still have a ‘calving notebook’ for recording the animal’s tag, the day and month and year it was born. This means the staff and I know which herd and cow the calf came from. Running a dairy farm, this is part and parcel of livestock management and it builds lifetime traceability for our on-farm animal records.

How do you register your animals in NAIT?

After they’re born, I register them in CRV Ambreed first and then I’ll follow up and register them in the NAIT system. This has been a point of frustration for dairy farmers, as it is essentially duplication having to transfer your animal information into NAIT and Ambreed. It’s bloody important you check the information is the same in both systems and that any future movements are captured in NAIT, as this has implications for not just the accuracy of the NAIT system but also our national biosecurity.

On-farm biosecurity is a big focus then?

Absolutely. My business mantra is ‘make your farm your fortress’. The beef farmer and grazier that I trade animals with have the same philosophy and we essentially operate a closed farm system. This reduces the risk of disease spread as all animals coming on and off farm can be identified and accounted for.  I’m due to introduce Simmental bulls on farm in September and I’ve used the same breeder, from Cornwall Park in Auckland, for about 10 years. For me, it’s up to the farmer to be diligent about who they are dealing with. It might mean a regular, quick phone call or text, and that builds mutual trust.

Any NAIT tips for farmers?

Tag retention can be a nuisance sometimes and it’s likely you’ll lose a tag or two. I recommend using secondary visual tags as well as your NAIT tags. While it’s not compulsory and it costs a bit extra, it saves a lot of hassle in the long run. I use a scanner, but the secondary tag is still great for quick visual reference. If you have a difficult animal it is safer too for reading the tag number.

Why should farmers prioritise their NAIT accounts?

I believe M. bovis (Mycoplasma bovis) has changed how farmers view traceability and disease management.  In the past, farmers didn’t have enough information about their NAIT obligations and were not given any reasons why they should bother. I too was one of those who weren’t convinced. Now, of course, you can see why it’s important when you’re trying to manage a disease outbreak and reduce the risk of spread. It’s been a learning curve for everyone in the industry. We all make mistakes. I got in touch with OSPRI to get my account sorted when I realised my livelihood and our national biosecurity are at stake.

Marlborough deer farmer Justin Stevens has the records of all his deer dating back to 2016.