Getting to the bottom of ill thrift 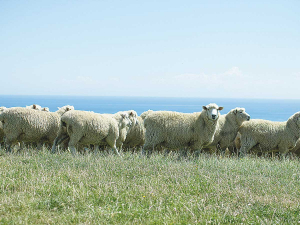 One of the biggest causes of ill-thrift in livestock is parasitism.

Ill thrift is a term used to describe when stock grow at a slower growth rate than expected, given their feed allocation.

It is defined as when lambs or young cattle have more than 30% slower growth rates than expected.

Traditionally, farmers identify if their flock is affected by ill-thrift by:

A recent project showed that farmers can also use Beef+Lamb New Zealand Q-Graze software (which predicts liveweight gain given pasture intake and quality) to show that stock have ill-thrift. Actual performance (e.g. hoggets growing at 75 g/hd/day over summer) can be compared to Q-Graze’s prediction of what they should be doing (e.g. 100g).

The most common reason for stock growing slower than farmers expected over summer and autumn was poor pasture quality. However, when pasture quality was taken into consideration, the next biggest cause of ill-thrift was parasitism—around 45% of the time in young sheep.

The project monitored actual growth rates of young cattle mobs in the Waikato and compared them to Q-Graze predictions. It was shown that 36% of the cattle were suffering from ill-thrift. Further analysis indicated that 30% was due to parasites and 20% was linked to fusaria toxicity. Some 50% of the causes were undiagnosed.

In sheep, healthy ewe lambs were growing at 142 g/day. However, those with ill-thrift grew only 46 g/day. Over 62% of the flocks monitored through the project had ill-thrift.

Of these, 45% was due to parasitism, 19% due to fusaria toxicity and 36% had undiagnosed causes.

Ill-thrift is caused by a number of different factors so it is important that tests can identify a particular cause. The project investigated and validated tests for parasite levels in faeces, rumen fluid and pasture, as well as for two fusaria toxins/nivalenol (NIV) and deoxynivalenol (DON).

Using the on-farm data, scientists were able to show the relationship between the levels of fungi, spores, larvae, etc and liveweight gain (LWG)/suppression.

The key links were:

The degree of LWG suppression was not able to be related to FEC in lambs, ewes or cattle. Very high FEC (>1000 epg) is often associated with reduced animal performance. However, this is not always the case.

The mix of worm species in the infection (contributing to the FEC) is possibly more important than the level of egg output (FEC) in influencing the effect on stock.

Low egg count does not necessarily indicate that parasitism is not impacting on animal performance—high levels of larval intake from grazing contaminated pasture can affect LWG before the worms have developed to the stage of egg-laying adults.

The good news is that the biggest causes of ill-thrift (parasitism and pasture quality) can be reduced by management (e.g. providing stock with higher quality pasture, management to reduce larval contamination of pastures, worm control). It is best that farmers eliminate these causes first, before tackling the more complex pasture fungi issues.