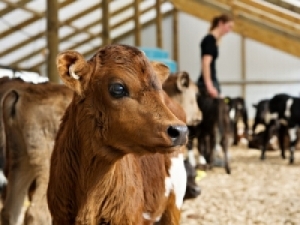 New regulations will come into force in time for spring calving this August.

Primary Industries Minister Nathan Guy says he had always intended to "fast-track" some of the new animal welfare regulations on the treatment of bobby calves.

These regulations will come into force in time for spring calving this August. Initial drafts have been the subject of nationwide public consultation meetings, along with other proposed changes to animal welfare laws.

Rules in force from August will require bobby calves be four days old before being trucked, and no journey may exceed 12 hours. The rules will prohibit young calves being shipped across Cook Strait and being killed by 'blunt' force unless in an emergency.

Guy says by February 2017 calves will have to be fed at least once in the 24-hours prior to slaughter, and the new rules will mandate shelter for calves and proper loading and unloading roadside facilities.

Guy has announced the new regulations now to give farmers time to comply by August, but he says none will be a surprise to farmers.

"This brings more transparency into the system and farmers realise consumers are demanding more of this inside the farmgate; it's an opportunity for farmers to respond accordingly. The great majority of farmers are already adhering to this, but it will be a bit tougher on the odd scallywag -- not a bad thing."

The new regulations are among work by the government and the industry to ensure bobby calf best practice, Guy says.

"They also provide MPI with a wider set of compliance tools including the ability to impose direct fines for lower level offending, and a wider set of offences to undertake formal prosecutions against."