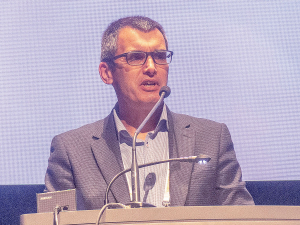 Tony Wright says The EU FTA has given a major boost to the NZ honey industry’s claim to exclusive rights to the name ‘mānuka’ honey.

In a chapter on Māori Trade and Economic Cooperation, the FTA specifically defines mānuka as the Māori word used exclusively for the Leptospermum scoparium tree grown in Aotearoa New Zealand, and derivative products such as honey and oil. It also describes mānuka as culturally important to Māori as a tāonga and traditional medicine.

“The exact text that they put in there is exactly what we’re looking for to go to the next step, which is to secure geographical indications for mānuka honey,” said mānuka advocate Tony Wright.

He says it’s a significant development.

“What it means is that Europe’s basically said, ‘Yes we agree, we will recognise mānuka honey as being uniquely from New Zealand’.”

The FTA signing came a couple of weeks after Wright spoke at the recent Apiculture NZ Conference in Christchurch, outlining progress in the multi-pronged effort to secure the rights to ‘mānuka ’ internationally.

He revealed at the conference two findings from new research, not yet formally published, that indicate significant differences between New Zealand mānuka trees and honey and their Australian rivals.

One used Rapid Evaporative Ionization Mass Spectrometry (REIMS) to analyse honey’s chemical composition, and the other used something called an FST score to analyse the genetics of the trees.

Wright said the FST analysis showed some variation within New Zealand “but nowhere near the significant difference between here and Tasmania”.

He said it will be evidence to support future applications.

“The Australians can’t say that their leptospermum honey is the same as ours,” he told Rural News.

“It’s another one of those proof points that says what’s happened here in New Zealand with our unique environment has shifted the genetics in a way that the product is different.”

Wright explained to the conference there are several methods of protecting a name, including certification trademarks (CTMs), geographical indicators (GI) and protected food names.

All rely on establishing a reputation for your product, he said.

“For example, someone buying champagne expects it to come from France and expects it to have certain attributes and that’s a similar sort of thing that we’re trying to get across the line here.”

Wright said naming rights meant that the producer is protected but so are the consumers because they can rely on the product to be authentic and have the qualities that they want.

In December, the UK Intellectual Property Office declined to register mānuka as a trademark, in a ruling welcomed by Australian interests who had opposed the application.

An appeal is underway, said Wright.

“We think they got that wrong. We’re quite sure that they got a lot of aspects of that decision wrong.”

Wright said some places such as China would need to see a certification trademark or similar level of protection in New Zealand.