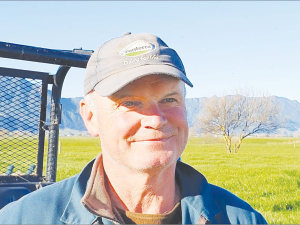 While the co-operative has used proceeds from previous divestments to reduce debt, this is the first time it has signalled a return of capital to shareholders.

The co-op didn’t return any capital to shareholders after the sale of its ill-fated China Farms. Over the years, the co-op invested close to $1 billion dollars in the Chinese farms – with little or no returns for farmer shareholders.

McGiven believes that after the experience with China Farms, most shareholders and milk suppliers will back the sale of the remaining overseas milk pools.

Fonterra believes it has an opportunity to differentiate New Zealand milk further on the world stage, with the aim of getting more value from the co-op’s milk.

As a result, it is reviewing ownership its Chilean and Australian businesses where it still collects and processes milk.

McGiven, a former Waikato Federated Farmers president, told Rural News that selling assets and returning most of the proceeds to shareholders is the right thing to do “if those plants pose a risk of becoming a burden on the balance sheet”.

“Since those assets have been paid for over time by the suppliers, then that is where the sales proceeds should go.”

He says focusing on NZ milk is a no-brainer.

“Especially now that we have with a static milk pool and increasing competition for milk from new processors,” he says.

“Fonterra can better monitor the quality of the product and better secure the supply chain so that potential milk contamination issues can’t occur and also better oversee costs.”

Chief executive Miles Hurrell says as the co-op looks out to 2030, the fundamentals of dairy – in particular, New Zealand dairy – look strong.

“This comes at a time when we see total milk supply in New Zealand as likely to decline, and flat at best. On one hand, this requires the right capital structure to help ensure we don’t lose the benefits of what generations of farmers have built – a New Zealand dairy cooperative of scale.

“But on the other hand, it gives us more options to be selective about what we do with our coop’s milk. In doing so, we can increase the value we generate for farmers and New Zealand over the next decade.

“To make this happen we have made three strategic choices – continue to focus on New Zealand milk, be a leader in sustainability and be a leader in dairy innovation and science.”

Fonterra also plans to boost its annual R&D investment by over 50% to around $160 million per annum in 2030.

Fonterra opens with mid-point of $9/kgMS