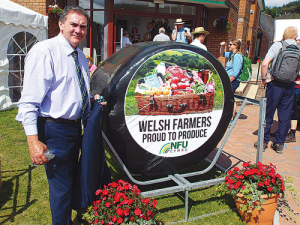 Milk production in Wales has changed dramatically in the last 30 years: in 1984 the country had 6500 producers; now it has 1730 achieving the same production.

Challenges abound, notably because of the 2015 removal of quota on milk production, and Brexit due to take effect in 2019.

The quota removal prompted higher cow numbers in Ireland, Germany and Denmark, and this coincided with the embargo on the supply of dairy products to Russia.

Over the last two seasons, cow numbers have reduced, but the net result is 330,000 tonnes of milk products held in EU intervention storage, hanging over the industry like a sword of Damocles.

At the recent Royal Welsh Show, Dairy News caught up with Aled Rhys Jones, chairman of the NFU Cymru (National Farmers Union of Wales) Dairy Board, an eighth-generation dairy farmer from Caernarfon in North Wales. Milking a large herd of Holsteins whose output goes to a private dairy company on the Welsh border, Jones is well placed to comment on the industry as it tumbles towards Brexit.

“The exit from the EU is a challenge, and dairy farmers will need to get a whole lot smarter… become price makers rather than price takers,” says Jones.

Farmers now get 28-29 pence per litre for milk destined for bottling or cream, and 36p/L for milk for cheese production.

“The exit will mean export outlets to mainland Europe will likely be closed or at best protected by border levies, making that outlet uneconomic,” Jones says.

He suggests a change of thinking to embrace long term supply contracts might help remove price volatility, which puts pressure on cashflows and farmers’ ability to pay bills as they fall due.

UK dairy giant Muller used the show to announce a direct futures contract which allows producers to agree a monthly price for up to 25% of their milk volume for 12 months ahead.

Welsh producers face challenges similar to those seen in NZ: labour shortages are prompting a move to robotic milking; the rising popularity of the ‘green’ lobby, particularly in urban UK, is pressuring animal husbandry; and maintaining production in nitrate-vulnerable zones -- these cover much of the better land in the principality – is tough.

Dairy farmers on both sides of the border face a rise in tuberculosis in herds, and badgers are seen as the causal link, bring a call for culling. Evidence fingers these nocturnal animals as the key vector yet public opinion is against culling, despite 9500 dairy animals being destroyed in 2016 alone.

Jones remarked on the anomaly of a public outcry at a few hundred fish being killed by pollution in a river, yet they appeared blind to the wider implications of tuberculosis.

Meanwhile, Brexit: exiting Europe will mean the UK government will have GBP 13 billion it need not pay to the EU from March 2019; the government has committed to match support payments until at least 2020.

Looking at Wales, the payments to the EU in support of the Common Agricultural Policy and European Structural Funds amounted to about GBP 658 million in 2014.

Dairy industry leaders are worried that if the redistribution of funds is calculated under the current Barnett Formula (the system now used for calculating the distribution of subsidies) Wales could end up out of pocket.

Then there’s the question of who controls the distribution of funds, given that devolution was passed to Wales 17 years ago, the Welsh assembly deciding where support was needed.