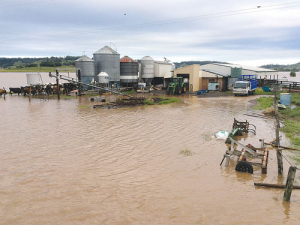 About 45 dairy farmers took severe damage in northern NSW, centred on Lismore and Muwillumbah, and about 50 in Queensland.

Floodwaters cut off farms and mains power was down for at least a fortnight after the storm.

A QFF spokesman says the cost to the state’s farms will be at least A$6m. About 60% of farms were affected in the flood-hit regions. Also, five farms in Logan City, two on the Gold Coast, and others in the Condamine and Mulgowie region were affected.

Queensland dairy farmers can apply for state and federal grants of up to A$25,000 to meet clean-up and recovery costs.