Payouts from cashflow, not balance sheet 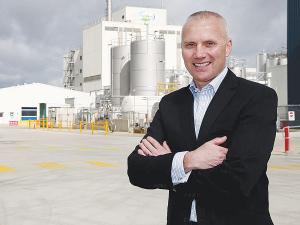 Fonterra says its payouts to Australian farmers are being funded by its operations, not propped up from other places in the balance sheet.

He has been reassuring suppliers that the prices are sustainable.

“I can look any farmer in the eye and say, ‘We can afford this,’ ” Dedoncker said.

“Does it have the potential to be better? It does. But do we need to see certain things play out? Certainly. But it’s too early to predict what it could be.

“But the price we have put out there has been earned and we are confident in paying.”

Asked about differential pricing in different regions, Dedoncker said he had been making the offers “crystal clear”.

In northern Victoria, pricing was for a minimum volume and a higher quality standard.

“The reason is that with cheese contracts, like at Stanhope, we have to guarantee milk to that product.

“The $6.80 farmgate milk price is available to everybody. If you can meet the higher standards you can make a choice.

“In other regions we have a variety of different options. In Gippsland there is a premium for A2 conversion, in Tasmania there is an opportunity for growth, and in the West we have agreements for servicing our Woolworths contracts.

“The special offers are not for everyone, but we have been clear to suppliers about what they are.”

Fonterra said earlier this year it would be closing its Dennington plant in western Victoria, which raised questions about the future of other factories.

But Dedoncker says the Stanhope and Dennington plants are very different.

“Dennington is a much older asset and focussed more on commodity powders. At Stanhope we have a plant which is probably the most modern cheese plant in the southern hemisphere. At Stanhope the agility we have built in has really come to the fore. Granted, it’s not running to capacity but we have enormous flexibility.”

Fonterra’s recently upgraded Stanhope cheese making facility is not working to capacity but is still generating income for the company, Dedoncker says.

The company has ploughed millions of dollars into upgrading the plant but is unable to run at full capacity with milk volumes falling in Victoria. Fonterra has been transferring milk to the factory to keep it running at optimum level.

Dedoncker said the factory is playing a part in Fonterra’s successful cheese business in the consumer and food service sectors.

“We are the largest cheese player in the country and we have the number one brands. That business has had its best year ever.

“Our branded products are doing very well and have had the best year ever. We will make more cheese this year than last year.”

Cheese is earning a premium in sales for consumer food service and international ingredients.

Dedoncker says Fonterra is maintaining its milk share in Australia.

He said the declining volumes through the factories are forcing them to look long and hard at the business.

“We are proactive about the choices we make,” he said.

In the ingredients business, with products like Bellamys organic, and the baby formulas and powders, Fonterra has been reviewing its arrangements and turning away from non-moneymaking deals.

“We are doing less in the tradeable stuff. We are not waiting on this, we have already made the choices. The good thing is that we have options and we are exercising them.”