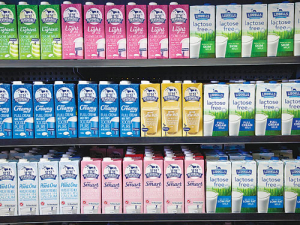 Milk production in Australia is ahead by 3-4% over last season.

Australian dairy farmers produced an estimated 650 million litres in March, an increase of 2% on March 2017.

Severe 3-month rainfall deficits have developed across much of east and southeast Australia, along with severely depleted soil moisture levels. While parts of New South Wales and Queensland have had these for a while, the effects are beginning to show further south, with total Victorian milk production for March up just 0.1%.

Whilst the latest climate outlook suggests above average rainfall for parts of eastern Victoria and northeast Tasmania, much of this is expected in June. The lack of a proper autumn break and the ongoing effects of the March 17 fires will continue to affect milk production, but with Victorian milk production still ahead by 3.7% on an YTD basis, a projected total national milk production of over 9200m litres still looks probable.

Available data from Australian manufacturers continues to show a shift away from the butter/SMP manufacturing stream towards the production of cheese and WMP, as manufacturers respond to the better overall returns offered by this stream.

And the composition of Australian imports also appears to be changing. Based on ABS import data to February, the growth in Australian cheese import volumes appears down about 5% -- on trend for about 120,000t for the full 2017-2018 financial year. 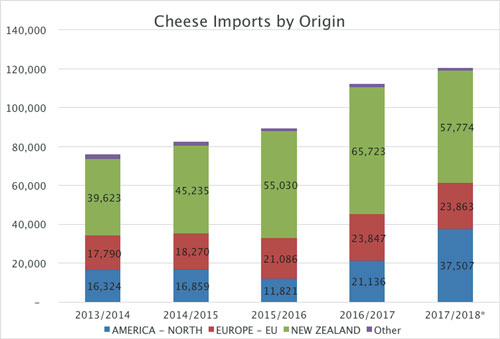 It’s still a record amount of cheese, but this growth is much less than the surge in 2016-2017, when cheese imports grew by an astonishing 26%. This growth has come entirely from the US, with cheese imports from New Zealand down and total volumes out of the EU flat (see graph).

Perhaps more extraordinary is the trade in infant formula. Australia imports alot of retail-ready infant formula, primarily from NZ, which are sold in Australian supermarkets and pharmacies.

Whilst there is a lack of clear data on the subject, actual domestic demand seems unlikely to account for all, or even most, of this increased demand.)

Since 2010-2011, ABS data shows that the Australian infant population (ages 0-3) has increased from 1.17m to 1.25m in 2016-2017, for a growth rate of 1.0%, whilst sales of infant formula have grown 12% annually over the same period. Demand from the so-called Daigou (shoppers who buy this product off Australian shelves and then re-exporting to China via unofficial channels) may explain some of this huge growth.

This same demand for Australian infant formula has also seen continued growth in direct Australian exports, with export volumes up 34% YTD, and on track to exceed 30,000t by the end of 2017-2018. Close to 90% of this infant formula is exported to China and Hong Kong, where Australian dairy products sell at a premium.

In 2016-2017, Australia exported about 24,000t of infant formula, worth $US310m, whilst importing 30,000t worth $US240m. The case of cheese or infant formula also illustrates a key point: the global market is going to become more important for the Australian dairy industry.

Australia certainly exports less -- in absolute terms and as a percentage of milk produced -- than it did immediately after deregulation. However, when faced with the latest industry crisis, a fall in milk production did not necessarily lead to a decrease in Australian exports; however imports did increase noticeably.

Like it or not, Australia is locked into the global dairy market, through free trade agreements and the presence of multinationals such as Fonterra and Saputo, with global ambitions and supply chains and strategies to match. Australia is now an importer and an exporter of dairy products, so the idea of two distinct domestic and export markets for most dairy products appears increasingly irrelevant.

This means that rather than retreating from world markets to focus on satisfying local demand, the Australian dairy industry will interlink more with global markets.

• Laurie Walker is an industry analyst with Dairy Australia.