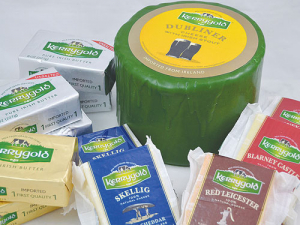 Kerrygold sales have jumped 20% in the US last year.

Ornua chief executive Kevin Lane referred to “excellent performances in established markets such as Germany and the US, and more expansion in the developing markets of Africa, China and the Middle East”. This was despite market volatility and political uncertainty.

“We have built a diverse global business by investing in our brands, technology, in-market presence and our people.

“[So we] continue to deliver for our members and for the Irish dairy industry, even in more uncertain market conditions.”

A members’ bonus of $23m included some of a windfall from selling DPI Specialty Foods for $8m (in addition to a DPI-related bonus of $24m previously paid in 2016).

In May 2016 Ornua suspended the monthly Ornua milk levy in recognition of the hit Irish dairy farmers had taken from the global dairy downturn.

The co-op’s Kerrygold had record annual global retail sales of $1.4b. Ornua aims to move Kerrygold from being a world-class butter brand to an instantly recognisable $1.6b global dairy brand.

In 2016 it launched Kerrygold Yogurts in Germany, Kerrygold Spreadable in UK and continued rolling out its Kerrygold Irish Cream Liqueur in Europe and the US.

Record Kerrygold global retail sales of $1.4b including 20% volume growth in the US

Acquisition and integration of US powder ingredients business CoreFX Ingredients.