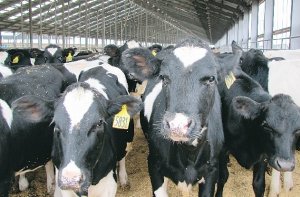 FONTERRA HAS just commissioned its second dairy farm in China and begun work on a third farm. The new farm is performing ahead of expectations, says the man in charge of the co-op's overseas farming ventures, Peter Moore.

He told Dairy News production is up 4-5% on expectations. Minor teething problems had occurred, but nothing major. "Animal health has been particularly good."

The newly commissioned farm, Yutian One, is in Herbei province near Beijing.

Moore says the farm currently has 1000 cows and mature heifers in milk and another 900 due to calve in the next two months. "We hope by this time next year to be milking 3000-3200 cows. If you take into account the young stock and supporting stock we'll have about 5500 animals on the farm."

Changes have been made to Yutian One, based on what was learned from the first and pilot farm at Hangu which is similar in size.

About 2800 cows are being milked there but the setup is different from the new farm.

"I'd expect the new farm to perform significantly better than the pilot. This improvement is based on what we learned from the first farm. The start-up has been smoother and milk production per cow has been quite a bit higher. We've got better systems and processes on this farm which enables up to monitor cow performance a lot more closely," he says.

One major difference between the two farms is in the milking parlor. The pilot farm is similar to an average herringbone shed in New Zealand, while the parlor at the new farm looks more like those seen on American feed-lot farms.

"At the new farm there is individual cow identification, allowing individual production data off each cow, which you can't do at the first farm. This enables us to make better decisions about which cows are going to perform best in the system. It also means we can tell how much milk each cow is producing and the return we're getting on the feed we're giving them."

The cows, run in mobs of 200 at Yutian One, all have electronic collars and the data from each animal is fed into a central database. Moore says they could have put in more sophisticated technology, but the data being collected now is a huge improvement on what happened at the pilot farm.

Yutian One employs about 100 local people.

Local farmers are contracted to grow maize silage which is a major feed component for the farm.

The third Fonterra dairy farm, 7km from the second farm, is due to be commissioned by late October.